I attended three Revit user group meetings this week, BUGIE (aka RUGIE), LARUG and SCRUG. Each was well attended in light of the new release information and Scott Davis, Autodesk Technical Specialist, doing the presentation. Each evening went longer than usual but Scott could run longer than usual talking about one feature! What can he do? He's passionate! So thanks to Scott for bring the "What's new in 2012" information to a local projection screen!

James Vandezande, part of the author team who brought you Mastering Autodesk Revit Architecture 2011, and 2012 next as well as another book called Revit Essentials, visited both BUGIE and LARUG too. Check the books out at the Wiley site for more details and the author team blog ARCH + TECH. Have a look at the pictures see if you can find "Waldo"??

Here's a shot of the group at BUGIE (BIM User Group Inland Empire)
Thanks to host office: HMC Architects

Last item is a quick "Thank You" to 3D Connexion, AEC Factory and Microdesk for donating a cool navigation device to one lucky winner at each group. 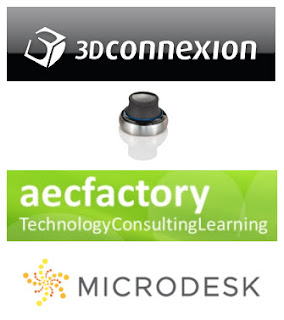 Each user group would not have beverages and food if it were not for the ongoing support of Autodesk, USCAD, Kelar Pacific, Microdesk, and AEC Factory. So thanks to each of them for their continued support!!

Thanks again to the vendors and thanks to all who attended!!
Posted by Steve at 5:17 PM

For those interested we posted Scott's Whats New in 2012 BUGIE presentation on BUGIE's Meet Up site and on Vimeo.