From the Dept. of Subtle we only find this parameter in Structural Plan views. 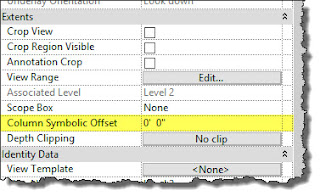 The help documentation says we can use this to "Specify the offset of a beam join to a slanted structural column. This only applies to coarse detail levels.". I've mocked up some framing to see what it does. 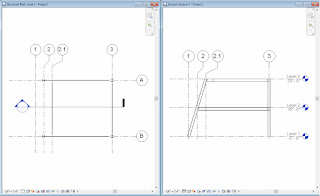 In this next image I've changed the offset value to 5'-0". You'll notice that the column symbol moved down toward the bottom of the column. 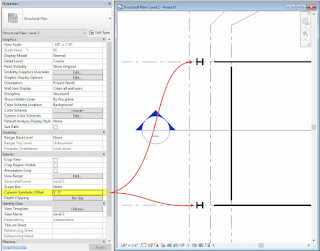 In this next image I've changed the offset value to -5'-0". You'll notice that the column symbol moved up toward the top of the column. 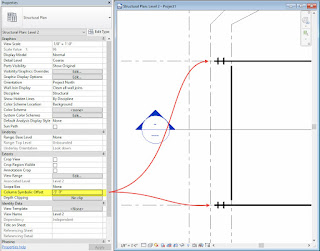 If a column doesn't pass beyond the view's level a negative value doesn't do anything to change that column's symbol location. Pretty subtle...
Posted by Steve at 8:00 PM No comments:

Load and Place a Family

Perhaps it isn't obvious enough but Revit is designed to deal with loading and placing a family according to context determined by our actions. Did we start a placement process or an admin process?

The component tools like Door, Window, Component, Detail Component, Air Terminal and so on provide Revit with placement context. The Insert ribbon tool Load Family is an administrative task which does not presume placement as a priority.

IF we start the Component > Place a Component tool first. Choose Load Family from the ribbon. In this context Revit knows we intend to place something but using Load Family tells it we need something that isn't already loaded in the project yet. If we choose to load multiple families it is ambiguous to Revit so it chooses for us which family to offer as the family to place now.

When we use Insert ribbon > Load from Library > Load Family separately it is regarded as an administrative task, i.e. "I need to load some things so they are available to everyone." Personally I have had many situations where I need to load families in this way, not place them immediately. If I do want to place a loaded family right away then I start the Component (or Door, Window etc.) tool first.

Autodesk's Sasha Crotty discussed the big picture for Revit's development at RTC in Porto. Sasha is the current Revit Core Product Manager which means (from her bio) she is responsible for the direction and evolution of Revit's multi-disciplinary tools, performance, and the API.

If you're curious about that you can check out her post HERE.
Posted by Steve at 3:04 PM No comments:

The Family has been Renamed

This warning message is probably familiar, troublesome and annoying.

I was reading a couple threads at RFO; THIS ONE and THAT ONE.

Apart from workset related issues I've written about before, I believe the underlying cause of renaming is that Revit perceives a family as different. That's not very surprising but I think that the actual difference is the result of different versions (2016 vs 2017) or having Save As used on the family (to put it in a different folder)...AND any operation that involves Copy/Paste, which includes the Insert from File tools.

When Load from Library > Load Family is used I only see it occur when worksets are being used (see the links at end of this post). The families merely having some different parameters (either instance or type) generates the dialog asking how we want to deal with the existing definition.

Using Revit 2017.1 and passing a family from one project to another I observed the following:

Family is renamed but no warning message:
If the family being introduced is an older version (upgraded) of one already in the model
If the family is same version but has had Save As used on it, i.e., to put it in a new folder location

Family is renamed and the warning appears:
If the family is an older version or Save As version AND Insert from File is used

The issue can be avoided if we are meticulous about using families from the same library and version. If we load office details from a detail library project file using Insert from File and the families (some or all) involved are based on older versions while newer versions are already present in the project we'll incur the renaming penalty.

The detail library should be updated, have the newer versions loaded first so they will be the same as those in the active project. If we need to keep the detail library in more than one version then we'll have to decide how to manage that and for how long. Merely upgrading the detail library model does not appear to be sufficient to avoid the issue.

I ought to mention that I can load a family and let it upgrade. Then if I use Copy/Paste to pass it along to another project file it does not get renamed unless the existing family in that project is based on a different version than the one I just upgraded. Upgrading a family does not seem to create the same problem that using Save As does for a family, at least not in the context of Revit treating it as a rogue family competing for the same name/existence in the project.

Regarding the workset issue I wrote three posts about previously, they describe how families can get renamed when worksets are being used and more than one person loads the same families and synchronizes their work in a specific way. The posts are:

I wrote an earlier post describing a way to create a schedule of linked files. I read a thread at RFO asking about including the current file in the schedule too. I can use the same approach to get that result too. This is a schedule of Levels (since all projects have at least one).

The schedule will naturally reference levels in the active file and I only need to check the Include elements in links option to get their levels too.

The query at RFO also dealt with custom file naming so I took advantage of the built-in Project Information parameter called Building Name. In each project file I've entered a custom File Name in Building Name. This example is using the format described at RFO. I also unchecked the option for Itemize every instance to avoid having many rows for each and every level in the files. I used Clear Cell to eliminate the Title (also turned off that option in Appearance) and used Hide Column for all the fields except Building Name. For this to work long term we need each trade to include this same piece of information in their model/file and update it when they post their next version.
Posted by Steve at 8:00 AM No comments:

While I was on a job site yesterday Autodesk released Revit 2017.1. In the past they've called this release R2. I think 2017.1 is better.

Finally the Space Naming Utility is just Space Naming and built-in. I've been complaining about the illogical segregation of this crucial collaboration tool for a long time. So many engineers I've met didn't even know the tool existed and that's silly. When they get to use 2017.1 it will just be waiting for them on the ribbon, no extra installation for EyeTee or Revit Managers to remember to deploy. Yay!!

As for what features are included with 2017.1 you can check out the Inside the Factory blog post. As usual Luke has shared some very useful links on his What Revit Wants blog.
Posted by Steve at 12:38 PM 1 comment: