Opening a View and it Appears Empty

It's been my observation that this happens when you are opening a new view with another view open that is cropped or at least looking at a very different portion of the model where there isn't anything to see in the new view. This happens because Revit is trying to focus on the same location in the new view, based on the location within the model you were already looking at (the view you were just using).

In a simple model this automatic zoom/focus works pretty well. As soon as we introduce linked files, scope boxes, cropped boundaries etc... it gets less reliable or helpful. Just something to consider next time you are greeted by an empty view. It might help to close down your current view first and use a simpler view or a schedule to start from instead. Then again, using Zoom to Fit isn't hard.

Prior to Revit 2015 the stock door template had one wall type called Wall 1. Many users create additional wall types to make it easier to test our work for problems that can arise with different wall types (those with a different thickness), prior to loading into a project to test further.

I assume this is in response to observing that many people have be doing with this with their own content. It's been part of my door tutorials and sessions over the years. It's one less subtle task to deal with when starting out with a new door family.

Revit has supported docking the Project Browser, Properties Palette, System Browser(for MEP) and Reconcile Hosting for a few releases now. I find new users often struggle with the actual task of docking them because the UI interaction isn't entirely intuitive. There are graphic cues offered but users don't seem to recognize them right away. I find I have to make a point of stressing that the location of the cursor is paramount and that while they should be looking for the visual cues, the cursor is what drives them.

I made this short video (Two Minutes) to help capture the subtlety I'm talking about.

While I am at it, personally I find Reconcile Hosting hard to find. It has a button on the Collaborate ribbon > Coordinate panel but I also expect it to be lurking on the View ribbon > User Interface. That's because the Properties Palette, Project Browser and System Browser are there and Reconcile Hosting is the same sort of thing. At least I think so since it can be docked among the others. I also find it quirky that, since there is a button for Reconcile Hosting, there isn't a button for the System Browser on the Systems and/or Analyze ribbons.

I worked through an issue this morning with a fellow RevitForum member. He was trying to determine why desks in the architect's model would not show up in one of his views, using Revit MEP. It turns out that one of the earlier replies in the thread offered part of the solution.

The desk family involved wasn't made of native Revit elements. It was only imported DWG elements. In the view that wouldn't show the desk the view's Visibility/Graphics settings were being controlled by a view template and it had the Imported Categories setting for Imports in Families un-checked. Just one or many things we need to track down when Thing's Go Missing.

Cleaning Out the Closet - Print and Plot Setups

When you decide it's time to clean up a project, assuming it isn't an ongoing task. Don't forget that we can accumulate many saved printer settings and plot sets. While we are at it, it doesn't hurt to take a closer look at View Templates and View Filters. These can also quickly proliferate in a project and then we're left wondering how many are relevant anymore.

Alex at RFO brought up a quirky dimension issue when we use Filled Regions. We can apply aligned dimensions to a finished region's sketch but if you want to use a Radial or Diameter dimension on a arc segment, after finishing the sketch, Revit turns a blind eye to it. The dimension tool doesn't recognize the arc segment of the finished filled region.

Alex told me to fix it, so this squeaky wheel post is my contribution to fixing it. :)

For now the work-around is to drop a detail line on top of the arc segment, the dimension tool will see that.

Definitely fits in the Dept. of Quirky.

Going to spend an hour renaming views or sheets? Check out all the worksets for Views and close all user created worksets. Same is true of most things you need to edit en masse. Select them all and make them editable. You ask Revit for permission to work on them once, all together, and Revit doesn't need to pause every time you interact with something.

This is an echo of what other blogs have already mentioned because the new Application Manager for Autodesk 2015 products is blind to this previous version's update. You'd have to run Revit 2014 and have communication center enabled to get a prompt about it.

Revit provides two default Area Schemes in the stock (Imperial) templates;Gross Building (can't be deleted) and Rentable. When we want to create an Area Plan view Revit expects us to choose a scheme. The additional scheme in the following image is one I created (Retail Zones). 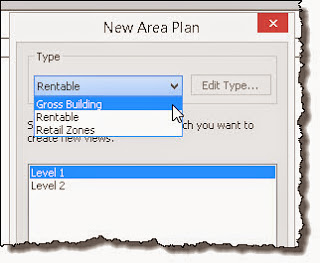 What isn't obvious, without a little digging, is that we can create more schemes. This is important because it does no good to attempt to reuse an existing scheme for additional plan views. They remain biased toward displaying whatever boundaries we've created already. Creating more area schemes begins here Architecture ribbon tab > Room & Area panel drop down > Area and Volume Computations > Area Schemes Tab. 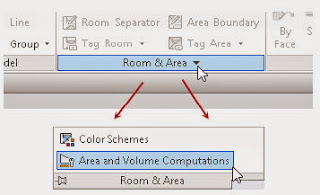 Once you've made it here you can create new or delete existing area schemes. As mentioned earlier Revit's locked down the Gross Building scheme.

Now you can return to creating a new Area Plan view and choose from among the new schemes you've created. If you intend to use a Color Fill Legend you also need to make sure you create a new legend type for your new area scheme.

Active Workset Display does not Refresh

I added new worksets to a Local File and used Synchronize with Central to share the change with others. The Active Workset lists on the ribbon and Status Bar did not update in other user's files after they used Reload Latest or Synchronize with Central. It was necessary to open the Workset dialog and just click OK before the new worksets would appear in either the ribbon or Status Bar Active Workset locations. The Active Workset list doesn't seem interested in being updated until the Workset dialog is opened. The list of Worksets that is offered in the Properties Palette when you select something is updated however.

Deleting a Workset and Open Worksets

We can delete a workset. Revit will let us either delete the elements assigned to it or reassign them all to a different workset. I'd say that generally it is a bad idea to choose Delete. Go slow, take care, think twice. Don't find yourself saying, "I've cut it twice and it is still too short." 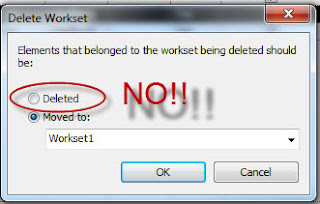 When choosing another workset remember the other workset has to be OPEN to be able to select it from the list! If you are using an older version of Revit don't do THIS!

The other day I mentioned that I generally include at least a few tracks of Joe Satriani's music in a playlist for walk-in music at conferences. I find his music is particularly conducive to spending hours pecking away at a project and Revit. I've been up late working on something just a little longer so I can hear one more tune.

I generally just let his albums play through without concerning myself about assembling them or any particular tracks into any coherent order. I recently decided to create a Spotify playlist that assembled some of my favorites, a time to crank some Revit list. My short list ended up with 24 tracks spanning 15 albums (2 hours worth of material written over almost 20 years), at least one track from each album.

For the most part they all groove, drive forward without too much quiet time or lulls. There are lots of tracks to choose from for that too but for working...driving, grooving works best for me.

Speaking of driving. When I visit clients in San Diego or Los Angeles that means at least a couple of quality hours in the car (or train) for music. There are some tracks that I've listened to together long enough that they don't sound finished unless they play together no matter the situation.

It's kind of like what radio did with Journey's two hit songs Feeling That Way and Anytime or Jackson Browne's Load Out and Stay. They played them together so often that it's like they are really one song. I think DJ's called that grouping "bathroom breaks", combined they played long enough to let them sneak away without the fear of dead air. In this list I purposely didn't put them next to each other just to see if I could cope.

Autodesk response regarding a query asking about mixing version of Windows (64 bit and 32 bit):

It's fairly common knowledge that we should be careful to make sure that all Revit users (at a minimum that are contributing to the same Revit project files) have the same Revit build installed. Less obvious or common is the tip that they should also be using the same version of Windows!

Thanks for sharing Meng005!

The Future of our Past

Autodesk's Tatjana Dzambazova recently gave a TEDx talk about some projects and technology she's been working on at Autodesk. Pretty cool stuff!

If you aren't familiar with Tatjana, as a reader of this blog, you are very likely aware of a product she worked on at Autodesk. She was the Product Manager for Revit Architecture from 2005-2007. The following is some of the information provided on the YouTube page for her talk:

Tatjana Dzambazova is Senior Product manager and Technology Whisperer at Autodesk Inc., where she focuses her energy on promoting powerful design technologies to make them accessible to a wide range of audiences. Tatjana passionately evangelizes and teaches internationally.

For more information on some of the covered projects:

Northwestern University - Now and Next in 2014

Northwestern University is hosting a symposium in August, read the following for more details if you are interested.

NOW AND NEXT 2014 Symposium on Technology for Design and Construction

Learn about the innovations that are moving companies and people forward including:
Connect with and hear from the best and the brightest such as:
The symposium is coordinated by Northwestern University’s McCormick School of Engineering’s MPM Program.