Are you curious why a certain tag is offered to you when you tag something? How does Revit decide which one to use when you have more than one loaded?

Revit will use the last one you loaded. If you want to change the primary tag to use you need to visit Loaded Tags. You can find it under the menu Settings > Annotations > Loaded Tags.

When you choose a tag type in this dialog Revit will use it the next time you tag an object. You can also load a new tag family by clicking the Load button. 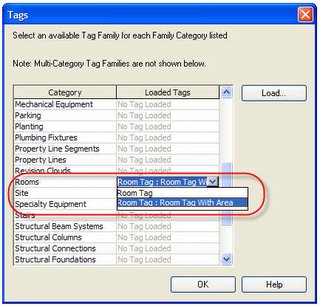 Naturally there are no Multi-Category tags listed since the listed is organized around object categories.

Oh, tags for rooms are an exception to this behaviour since you can choose from the available types using the Type Selector on the Options Bar. For other objects and their tags you need to use this dialog or change them after you've placed them.

In past releases of Revit you may have noticed that moving Reference Planes that had their Origin property checked had no effect on the actual origin of the family. Revit simply ignored this and continued to use the original intersection of these Reference Planes.

In effect the origin location was hardcoded. As a result many of us have made it part of our routine to avoid moving the Reference Planes at all.

Good News!! In my limited testing it appears that the most recent build has addressed this issue.
Posted by Steve at 9:27 AM No comments:

As the title says a new build has been posted. The following list of issues addressed by the new build was posted at AUGI by Tatjana Dzambazova, Autodesk Revit Building Product Manager, thank you!

Here are the improvements in this build since the last RTW (Release To Web) from September 14th:

Only two kinds of families have special behavior when viewing them in a project with respect to a view's cut plane. Those are doors and windows. All others use the view's cut plane setting in the project environment.

Doors and Windows use the cut plane defined in the family to determine how the object will look in a project's views.

When you need a family that is above the cut plane in your project to be visible you can use the Invisible Model Line trick and in many cases a Plan Region.

This model line travels through the cut plane of a plane view and lets Revit "see" the family that is actually above the cut plane. You can take advantage of Symbolic Lines to show dashed lines to represent the object above.

Be sure to check Joe Kendsersky's comment, I forgot about columns and he provided some more good info!
Posted by Steve at 4:36 PM 5 comments:

Got My Eye On You! 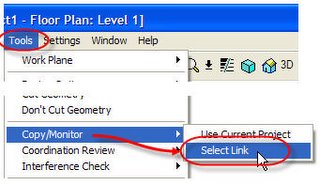 The workflow? The architect passes a building project to the structural engineer using Revit Structure and they Copy/Monitor Levels, Grids and Columns to save the effort of creating them in the first place and to permit Revit to keep an "eye" on them so any changes can be coordinated.

The Coordination Review tool allows you to see if any changes to these three categories has occured and decide to accept, reject or postpone a decision regarding any changes reported. 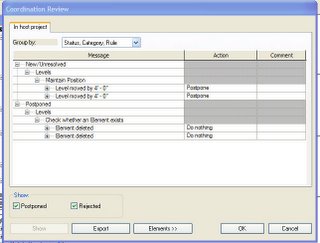 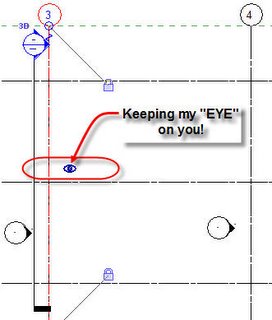 I'll dig into the details of this feature more next time out.
Posted by Steve at 12:41 AM No comments:

Split Sections in the Right Place

In recent versions of Revit the split segment option for Revit has been useful. As anyone who has used it very much knows, the section line wasn't accurately indicated for both ends of the section. Good NEWS!! It does now! Just noticed in the latest build (may have been fixed earlier?) that each end of the section is shown in the correct location in the opposite elevation views. THANKS!
Posted by Steve at 5:21 AM No comments:

So how good is AU? The social aspect of this event should not be overlooked or undervalued. If I attended without any expectation of learning a single thing in a class, I'd still attend. The things you learn from casual conversations with other attendees can justify attending by itself. You do have to expend some energy and bravery perhaps to put yourself in front of other people but the rewards are worth it. You meet people you never would have met otherwise, learn things that might never have been discovered and get to ask questions that occur to you during all this stuff happening, that might not have happened any other way.

And no I'm not a marketing shill for Autodesk. While I was compensated for my participation as an instructor for AU this year I spent several thousand dollars of my own hard earned money to be there, not an employer's money.

So a late night of socializing found me catching up on things (sleep) in the morning and I arrived late for "Getting Along: Coordinating architectural and structural design with Autodesk Revit Structure". At one point I found myself getting confused with the attempt to explain worksets! Otherwise it was an informative class.

Next was my personal favorite of the day (perhaps of AU), Danny Polkinhorn's class on the Revit API. Very polished and he tackled the arcane subject in such a way that a non-programmer could hang on, if even only by their fingernails. His code examples were very cool. Funny moment when he clarified who might not want to be in his class, If you don't know the difference between a Do Loop and a Loop-d-loop.

Donned my lab coat as lab assistant with Mike Gatke for Chris Zoog's "All New Tips and Tricks" class, the second of two. After the first we learned to warn people not to run Revit Structure! So...no repeat of that!

As a co-presenter, I felt a bit like a "fifth wheel" in David Conant's "Take Your Family to the Next Level" class. Last year's version felt better than this year's to me though many people were very complimentary of our efforts when speaking to me afterward. I guess you can never completely trust your instincts with this stuff.

The MGM party that followed served as a nice distraction from my introspection, picking apart my performance as a speaker this year. It was really great! Unfettered access to the rides complimented by food and drink on every corner. I overcame my "scaredy cat" attitude and did the "Tower of Terror" and found it fun! I think I reacted to the idea of an elevator going berzerk the same way the elevator company Disney approached for design help...shock and dismay. Tom McCann (Disney Engineering VP) told us in his keynote address that they said something like, "You realize we just spent the last century striving to prevent this from happening and you want us to help you make it happen?" (paraphrasing here).

Naturally as with all good things the event ended much too quickly and we headed back to the buses! Fortunately no one was really ready to quit and several of us continued to reduce the available supplies of liquid refreshment until nearly 2am.
Posted by Steve at 11:17 AM No comments: