When I first saw the iPhone I wanted to get one but didn't until a year after it was available. Just couldn't justify the premium to get in early. Once that settled down I was in! Before that I was pretty slow to get interested in the iPod and I really didn't get the interface despite it being so "obvious"...to some anyway.

With this new product I find myself interested again, like the iPhone but again not really prepared to plunk down $500 for it. I don't use the phone part of the iPhone much really so I could practically get away with just the iPad. I'm among those who want one...just a question of when. Hopefully the numerous references to the product's name relating to feminine hygiene products won't last too long.

Now getting to use Revit on it would be very interesting to this blogger too! Had to include that part otherwise this post would be completely off topic!

When you get this error message you can take the following action. Create a text file using Notepad. Enter the following text exactly:

Save the text file as debug.ini

Place this file in the installation folder for your Revit version, typically:

When you run your software you'll get a message box confirm the debug mode "Allow deletion of Non Empty Worksets".

After making a backup of your project for safekeeping open the project and try to delete the item in question again. You should find that Revit will allow you to delete it. Hopefully this will help.

As I mentioned in October, The Revit Style Guide is intended to help those who create content develop consistent coordinated families. The previous version 2.0 and version 2.1 is now posted. Hope it is helpful!

The new AUGI CAD Camp events are back and sporting a new logo. 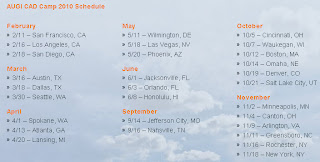 Just in case you were wondering what happened to CAD Camps. When AUGI's relationship with its executive director and services organization changed at the end of 2008 the AUGI CAD Camp events were sidelined. Initially because the team that ran it was no longer intact. The economic situation during the past year (2009) didn't make it any easier to get them up and running again. In the end the organization chose to focus on getting things back up and running in 2010.

Dept. of Subtle - Tale of the Dancing Ribbon Tabs

I see this issue quite a bit these days with students as we work though various tasks. It is easier to demonstrate with a VIDEO so I made one.

(The audio sounds a little "buzzier" than it sounded when I first listened to it. Maybe my ears were shot after a full day. I'll replace it when I have a different environment to record in.)

Off Topic - Mr. OpEd in Dublin

I get to travel to Dublin to do some work over the next couple weeks. Using Google Analytics I see that I get between 30-40 visits to the blog a month from Ireland with 20ish of them coming from Dublin. This past 30 days, as shown below, dropped by 10ish visits which I assume is because of the holidays and my lazy posting habits during that time. 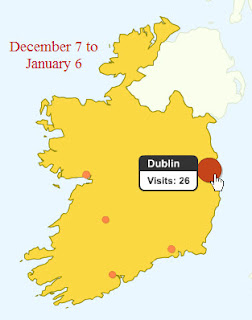 It seems to me that it means I've got at least one reader in Dublin. It would be great to meet my one or two readers while there! I'm also open to any advice for my stay there. I'm really looking forward to a real pint of Murphy's, or two...and naturally Guinness. Seems I'm too early to catch a Rovers match though. Looking forward to it!

Email ThisBlogThis!Share to TwitterShare to FacebookShare to Pinterest
Labels: Ireland, Off Topic

A post at AUGI by Aaron Rumple reminded me of a very subtle feature using the CTRL key. I stumbled into this using the Offset tool in Revit 2009.

Here's the scenario, imagine you are using the Offset tool to create a copy of a wall offset by four feet. The Copy option that appears on the Options bar is checked by default. That's great, but what if you wanted to use the Offset tool to move the wall not create a copy. You have to un-check Copy to get the Move instead. If you press the CTRL key prior to selecting the wall to offset the check mark is cleared in the Copy Option.

The AUGI post discusses this technique in conjunction with the Mirror Tool. Like with Offset the default setting for Mirror has Copy checked, assuming you want to create a mirror/copy, not a mirror/move.

As you probably already know, you can create a copy of an element by selecting it, pressing and holding CTRL and then dragging the selected element to a new location. When you press CTRL with Offset, Mirror, Copy and Move the Copy option becomes un-checked or checked in the case of Move.

I've never found any mention of this in the help file in the past. I just scanned through the 2010 documentation for any mention of it (using CTRL as a criteria) to see if they've added it but didn't find anything now either. A far as I can tell it's undocumented. Thanks to Aaron for the reminder!

Revit History in a Timeline

Every now and then I read some mention of Revit History. Today was a tweet via Twitter which mentions the wiki at Triple D Design.

Beau Turner started a wiki (Fall of 2005) focused on Revit (ADT too) and I helped out by setting up the basic outline of topics that you'll see there. I also contributed much of the content under the heading "The History of Revit".

I haven't visited the wiki in a long time because, sadly, it became more work to remove the spam that it received than actually adding meaningful content. It was a daily ritual of visiting the site, remove spam...only to realize that I spent all the time I could afford just doing that. This is why it is necessary to login.

Unfortunately that didn't slow down the spamming. As a result the timeline is a bit stale now while the AUGI version I will mention in a moment is up to date, except for documenting when builds were released (a wish list item). Their is some potential for making the wiki quite useful but it has languished.

Backing up a bit, in September 2003 David Conant (with Revit Technology Corp. and now Autodesk) posted a timeline for Revit. David's original post was made when the AUGI Revit forums were still part of Zoogdesign's Revit forums. I've taken over editing the post since then and do so when each new release cycle comes around.

I have links to both the AUGI hosted timeline and the Wiki in the sidebar on the right side of this blog under Revit Links.

There is also a Revit User's Manual at WikiBooks. A variety of people have been contributing to it since as early as 2006.

Previous mentions of Beau's Wiki here at Revit OpEd:
To Wiki or not to Wiki?
Wiki See Wiki Do

When you place a component, like a door, Revit provides a unique Mark parameter value. Same thing happens when you place a grid. Have you started a new project, placed a door and found a nice number like 234? How about a grid value of 2 or 15 instead of just 1 or A? Not all elements get a unique number automatically, such as furniture or casework for example. Those two just get a blank value.

Fortunately this issue is pretty quick to resolve. Just open your template, place a new component or grid and renumber the Mark/Name parameter so that it has the number just before the one you want your user to get with the template when they get started. This works fine for numbers but I'm not sure what to do about letters. If you want the grid to start with A...what comes before A? I've tried to get it to start with A again...but no joy.

I made a short video that shows what I'm writing about.

To answer a recent request, I've added a new category to Revit Inside to list firms that offer programming services using the Revit API. Happy programming!