The Void and the Revolve

A tale of mystery set in ancient times...a fairytale of majestic proportions...

Sadly it's more mundane than that. This morning I noticed a distinctly Reviteristic situation while answering a client's question. To get a void to cut a revolve, their orientation to one another seems to matter.

If I create a revolve in the Front view of a Generic Face Based template and then create the extrusion in a side (Right/Left) view the void won't cut if the extrusion extends too far toward the other side of the revolve (seem image).

It took two voids on either side of the Axis of the Revolve to get a full cut of the revolve form (see image). 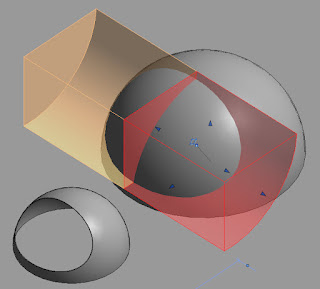 However if I create the revolve in the Right side view AND create the void extrusion in the same view one void is enough (see image).

Perhaps this is old news to some but it's definitely subtley quirky (which defines a Reviteristic for me). Next time you're taking a journey with a revolve and void...remember this? I'll try.

A recent message asked how they can enter values into the Project Base Point (PBP) like we used to be able to do when the PBP had a clipped/not clipped status.

The answer is Specify Coordinates at Point (SCaP).

In the past, when we selected the PBP, entered coordinate values, it actually shifted the Survey Coordinate System (SCS) away from the Origin/PBP. It was easy to assume we moved the PBP because it is easy to overlook the information that displays above the selected PBP. It says PBP but right underneath (see image) it says Shared Site: and the coordinates it displays are relative to the SCS. 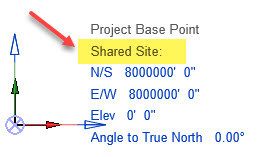 Entering values in the PBP directly (in the past) is same as using SCaP (now). The Survey Point will move to mark the 0,0 origin of the SCS after we enter our values. The PBP will still be at the Internal Origin (IO). The following image is 2019 and 2021 showing the same end result, just using a different tool. 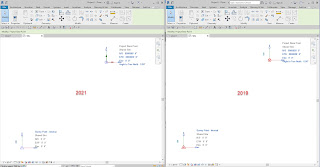 Entering values directly into the PBP now will move it away from the IO, something it did not do in the past. This invokes a Local Coordinate System (LCS) that uses the PBP as its origin. Spot Coordinate/Elevation annotation can reference this LCS. This why Revit won't let us move the PBP too far (10 miles) from the IO.

I think Autodesk should change the PBP reference to the Shared Site since it is confusing. I think the PBP should show reference coordinates back to the Internal Origin. There is probably some room for disagreement though, which is why it probably still references the SCS.

This change seems to annoy people the most because we can't just enter values into the PBP directly and get the "old" result. We can enter values but not to alter the SCS, which is what really happens with the clipped PBP of old. The unclipped status of old is when the LCS is invoked.

The PBP only moves in an unclipped state now, thus no clip.

After speaking with an Autodesk developer we now know that our issue is related to past eTransmit use. Revit mistakenly retained a flag it uses to mark that file as such.

If we can successfully use Synchronize with Central and we get that message when we use Save then the correct response to the warning dialog is the top option: "Save this model as a central model in its current location - Revit will remove this message and allow users to create local copies of the model."

Remember, the message is accurate for files that have been created via eTransmit too. In our situation the files were working fine on BIM 360 but they retained the flag that should have been removed when they were added to the cloud.

Info Added 6/4/2021: The warning is triggered ONLY in the following scenario:

The warning is triggered ONLY in the following scenario: The model has been transmitted and then upload to BIM 360 from Revit using the option “Work temporarily”.

To eliminate this warning for future project, please make sure you choose “Save as a central model in its new location” when uploading the models to BIM 360 from Revit.