Imported or Linked DWG Appearance as Generic Model Broken in 2017

Using Revit 2017, I have a 3D DWG file for some framing that I want to use as a coordination reference within a project file. Initially I linked the file directly to the project but that approach (unfortunately) doesn't respect the cut plane of a plan view which, for example, means cripples above a header show up in the plan view too (header as well).

I decided I'd use the old create an in-place Generic Model family trick.

If you're with me so far you're probably expecting what I expected; to find that Revit regards this imported 3D geometry as generic model (cuttable) category information, giving me the look I wanted. However, when I clicked Finish Model the linked file disappeared entirely.

I thought for a moment, "Am I just imagining that I could do that? I swear Revit used to do this?!?"

Hmm, I decided I'd create a component Generic Model family instead and use Import CAD. This way I could replace the source CAD file if necessary.and just reload the family later...if necessary. Also thinking, "...maybe it'll work this time, this way...?" Nope...

I gave in, I did a quick search using Revit Help and noticed a result called "Regression Revit 2017 - Cutting 3D DWG with section results in inconsistent model display".

Well I'm writing to declare that it's not just an issue in section views. The damn thing doesn't show up in a plan view at ALL.

I did try creating the family in 2016 and let Revit upgrade it in the 2017 project...no joy...busted. I also created a Specialty Equipment family (in-place too) and it shows up in plan view but since that category doesn't cut...it's missing the point, my reason for traveling this road in the first place.

A RevitForum member remarked that it was confusing to see that the Survey Point shows 0,0,0 after using Publish Coordinates. 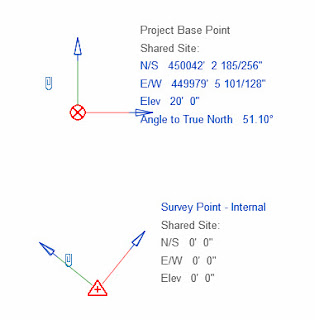 The image above shows the initial position, in a Building file, of the PBP and SP after using Publish Coordinates to pass the Shared Coordinate system information from a Site file to it. You can't see a building because they are quite far apart...which is why the icons do not change size when you zoom in/out.

When we open the Building model the Survey Point (SP) is marking its own origin, which is 0,0,0. When we examine the Project Base Point (PBP) we'll find coordinate values that indicate how far away it is from the SP. If we un-clip the SP we can choose to move it closer to the building and we'll see the coordinate values change to show how far the icon is moving away from its origin .

When we use Acquire Coordinates Revit moves the SP (when it is Pinned) to mark the location of the World Coordinate System origin (WCS assuming a DWG site source). When we use Publish Coordinates on the linked Building file it does the same thing but remember the SP is marking the WCS origin, which is 0,0,0 in the DWG...and for the SP of the building model too.

I hear and read the following a lot...


I then test it by removing the linked building model and re-link using shared coordinates and it works.

If you're tempted to do that, just don't do that on real projects since it opens the door to messing up the work we've just done. Just link the building model, re-position it and use Publish Coordinates. Then leave it alone; unless design changes require it to be moved again. A better test? Link the Site model into the Building model using By Shared Coordinates. That doesn't change anything you've done and you'll see they line up properly.

Placing a few spot coordinate annotations on this fine building design, after zooming in closer, looks like this. Also, the one closest to the PBP is assigned to PBP while the others are assigned to the SP. 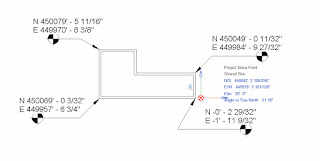 A comment was submitted to an earlier post about the new library of door families that came with the 2016 release. The question had to do with changing the head height of these doors. There are two folders (see the images in the other post): Residential and Commercial as well as a smaller collection of doors that are more similar to the past door library we had, but using a new naming convention.

The doors in the Commercial folder have an Instance parameter called Masonry Frame which toggles on/off a solid form that adjusts how thick or high the head of the door is. This image is the same door side by side but with the parameter off on the left and on for the door on the right. 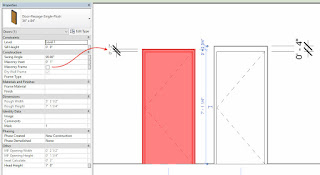 The doors in the Residential folder don't share this family strategy. Neither do the individual door families that are found in the root Doors folder. What is visible on the residential doors is trim, not a frame. The trim is designed to turn off if the Door Offset parameter is not set to zero. The frame form they do have are based on a sweep that doesn't allow for varying its dimensions.

Like all families, how they were conceived of and then created greatly affects their usefulness. In the case of the comment posted, the commercial collection of doors may work for them where the residential ones probably won't; not without some fundamental changes to the families themselves first.

I find that I consistently forget this is possible, to use a crossing window to select more than one element to trim or extend multiple elements at once. Don't forget Steve! Maybe now that I've written that I'll start remembering more often, hopefully. The following video is just the tooltip video that runs if you hover over Trim Multiple long enough.

I responded to a thread at Linked In this morning, something I almost never do. I find LI too frustrating to spend much time there. Regardless, the sought after result was to get horizontal and diagonal patterns (part of a material assignment) to line up, to appear to connect to each other. This is an image of what was shared in the thread. 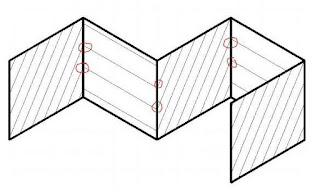 The Fill Patterns (Model) need to use spacing settings that will allow their endpoints to meet. For example, if the parallel horizontal lines are 300 mm apart then we can use trigonometry to determine the parallel spacing of the diagonal pattern.

Once the patterns work, it will still probably be necessary to fine tune each pattern's position on the surface of each wall so they each start at the correct location. That's because each wall will place/start the pattern you assign according to its own extents.

Alternatively we can use the TAB key to select one line within a Model Pattern and then use Move to adjust the pattern's location. If the walls are not parallel to each other it may be necessary to create a section view that allows us to see both patterns and use the Move tool. It may also be necessary or helpful to sketch a Detail Line from one endpoint of one of the patterns so we can snap easily while moving the other pattern's position.

Also, the taller the walls (the bigger the overall pattern) are the more important your choice of rounding (decimal places) for your calculated pattern spacing will be. You may find that the pattern begins to slip past or fall short of the adjacent horizontal pattern the bigger the pattern gets.
Posted by Steve at 10:00 AM 3 comments: