When you see a padlock or the EQ icon you can hover over the icon and click the Right Mouse button to display a "Show Related" option. This will identify each of the elements involved in the relationship created by the padlock or EQ feature.

Here is what you see initially: This is true for both working on projects and families.
Posted by Steve at 8:33 PM No comments:

Two features that Autodesk first created for Design Review will be showing up in Revit 2009 as well as AutoCAD 2009. According to images posted by resellers the View Cube and Steering Wheel (both Autodesk Trademark features) are clearly visible in the Revit interface.

The View Cube is a tool that permits the user to quickly change the viewing position by clicking on a portion of the cube as well as rotating the view by clicking and dragging the mouse around the cube. The Steering Wheel is meant to provide basic view changes as well as a means to walk around and through a model. You simply click on the portion of the wheel you want to use and drag the mouse to perform the task. You can reposition the center of a view's rotation by choosing the center option and moving the little green "football" to the new location. Then the other features will observe that location as the center of activity. The Rewind feature permits you to go back to a previous viewing condition, like a little slide presentation.

They take a little getting used to. If you haven't seen them in action, take a look at Design Review if you have it, if not get a copy since it is readily available and get used to them now while you have a bit of time.
Posted by Steve at 8:59 PM 7 comments:

Sometime ago Autodesk enhanced the process of reporting inelegant episodes, otherwise known as a crash, kaput or "seeya!", you know...when Revit closes for a reason other than you chosing File menu > Exit or clicking the big X.

When you take a moment to submit a report Autodesk is now searching through their knowledge base of known issues hoping to offer a solution. For example, if you are using an older build it will prompt you to download the newer build. If it actually finds a known issue it refers you to that web page. Many times though it can only offer an apology and hope that it (the cause of the crash) will be trapped better in the future and avoided entirely.

So next time (hoping it isn't frequent) take a second to jot down your thoughts in the provided dialog and submit the report. Then let Autodesk's little search engine do its thing and see if you get any joy!
Posted by Steve at 8:40 PM No comments:

Email ThisBlogThis!Share to TwitterShare to FacebookShare to Pinterest
Labels: Errors

I've kept this site ad free as much because I don't like ads as any other reason. I'm not consciously aware of any Revit blogs that don't have ads these days, though I imagine there are some. I don't really notice the ads if they are there either...I just don't. Just because others are doesn't make I feel that I must.

What does intrigue me is just how much ad revenue I've ignored or missed by not doing it too. How much? Pennies, four bucks, a hundred? Over three years now just how much would it be? There are bloggers out there making serious money doing it but they are blogging daily and have 10's if not 100's of thousands of readers. This little corner of the blogosphere draws a steady few hundred readers (I'm glad you visit and find it worthwhile to do so, thanks!) each day.

I guess I won't know unless I try it which means I'd have to be willing to lose eight readers...always a trade off. Can't there be a win/win?

I've removed the poll early as it seems evenly split between removing and keeping them. So I've just moved them to a new area called Inactive Revit Blogs further down the page. If a blog gets more than six months stale I'll move it there but I won't remove it because you never know when they'll fire up the pen again! Thanks for the votes!
Posted by Steve at 8:16 PM No comments:

Once Upon a Workplane - Seeing is Believing

I wrote the bulk of this post nearly two years ago but apparently never finished it. Better late than never I suppose. In Once Upon a Workplane I wrote about the role of reference planes and lines. No mention whatsoever of how you actually change the Revit working environment to use or establish a new workplane. So now I will…you can do this in most views; except for schedules, legends, camera, drafting and sheet views.

Setting a workplane or making it visible is possible via the menu, a defined keyboard shortcut or toolbar.

Or the toolbar route...

Keyboard shortcut route...There is no default keyboard shortcut, you'll have modify the keyboardshortcuts.txt file to assign your own. There are three commands you can assign; Set Work Plane, Work Plane Visibilty and, if the workplane is already visible, Select Work plane Grid

Clicking the Plane button opens the Workplane dialog box, doing this in a floor plan view will look like this, notice the grid that is temporarily visible while the dialog is open? 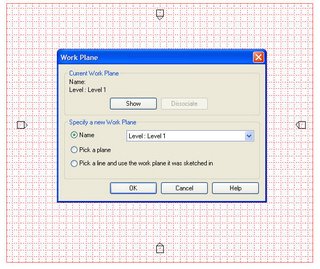 First option to establish a different workplane is Name via the drop down list next it. Revit will offer a Level, Grid Line or a Reference Plane that has been named in this list. 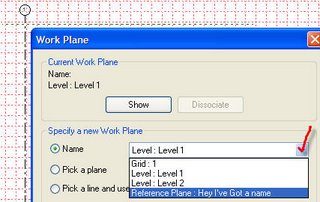 The second Option is Pick a Plane. You must either be able to select a Reference Plane or any planar surface of an element within the view. With Workplane Visibility on you can confirm that you succeeded. (You can also click the Show button to focus on the surface you've selected if you open the dialog again) The Third Option is "Pick a Line and use the workplane it was sketched in". Again you'll have to be able to pick a line which assumes there is one to pick! When you select an Element Revit will sometimes offer you the Edit Workplane button on the Options Bar.

This permits you to change the assigned workplane of a model line, an in-place family as well as work plane based families, to name a view. When you use this option you will only be presented with work planes that are parallel to the one already in use. To moved your element to a different work plane you can temporarily make the new one parallel and then reposition it again.
Posted by Steve at 8:00 PM No comments:

Autodesk announced today in a very non-specific way that new releases are coming. This isn't really a surprise since this is the time of year that they release new software. However, a couple resellers who also blog have shared a bit more detail. They seem to be free from the constraints that users who participate in product beta cycles have and are therefore able to post such information. I'm sure that Revit users are grateful to get a peak at the features that await them in the next release, I know I am.

A long term wishlist item has been eliminated with the replacement of Accurender with Mental Ray. Also a frequent topic at AUGI and the wishlist is the "Mirror Project" concept which is reported to be included. Overriding dimensions is also a frequent visitor to the wishlist and can now be crossed off. This release looks to be a pretty strong one. I'm sure we will find things to continue pestering the development team about though!
Posted by Steve at 8:59 PM 2 comments:

I am presently in San Rafael, CA attending the Autodesk User Group International's board of director meetings this week. We discussed getting together somewhere and inviting any and all AUGI and Autodesk products users to hang out together. It's really late notice...since we're talking about tomorrow 8-(

Richard Binning, the outgoing President, already posted a notice about it on his blog and so did Lynn Allen. Hopefully the fact that they posted a bit earlier will help!

Hopefully it isn't TOO late for YOU to come by and say hello, trade a few stories...drown your sorrows about your favorite football team who has to wait till next seaons.

Speaking of football, here's a picture from Lynn's Super Bowl Party that Lynn invited the board to attend. No I'm not in the picture, I was on a plane when the party was in full swing...my loss! Interested in more info on the board? Meet the Board
Posted by Steve at 11:16 PM No comments: