If you scroll first you'll realize that these four easy steps seem quite long. It takes me some time to explain them but they don't in practice. The variable in how long it will take has to do with when you decide to start the process. Doing it earlier with little in the model will take less time than later with most of the project modeled.

Edit April 21, 2017 - The above is still true conceptually. With the release of Revit 2017 this process has changed a bit. Please refer to THIS NEW POST instead.

File Menu > Save or Save As - Browse to your server and project folder. Use a "good name". This is the most important step, if done incorrectly you can still fix it now. If you wait until after step three, you have to "start over".

Similarly you must use the name you really want, now...no changing your mind or the same thing happens, Revit considers the new file a Local File.

Pick your location and name carefully and then act. If you make a mistake, Fix it NOW...assuming you realize it is wrong.

Revit opens this dialog to confirm your intentions. Clicking OK causes Revit to add two parameters to every item in the database, Workset and Edited By. Using the Library metaphor I like, this is the "book shelves" and the "library card" user information. It will take less time to do this step if done early in the project. It takes longer the more "model" there is to process.

I recommend you keep the two default worksets that Revit offers you. If you need others you can create them once Revit offers you this dialog box (as soon as it finishes adding the two parameters to the database). 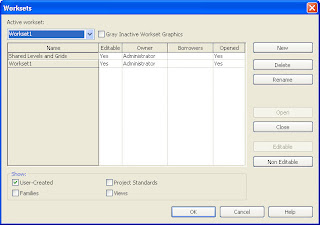 Revit won't let you delete "Workset1" now or in the future. You can rename it but you might find yourself confused later if you want to delete "that" workset and Revit won't let you. For this reason I tend to keep it as a "catch-all" workset for items that I can't decide how to organize yet. You can delete "Shared Levels and Grids" if you like or rename it but again it serves an "obvious" role. Obvious worksets work better as a organization tool.

Step Three - Save your Work

File menu > Save - This is your last chance to "run away". This dialog confirms that you are going to commit your changes to the database and your project will become a real "central" file.

This commits the changes to the database structure that we made in the previous step. The file is now a Central File and you've gone beyond the point of no return. Any changes to the file location or name are going to require special action on our part to keep our team collaborating.

When we started this process, once we moved beyond Step Two we became the "owner" of everything in the database. When we did Step Three Revit returned most of the elements we borrowed for us but it did not return the User Created worksets. We need to STC in order to return everything so that the whole team can begin working on the project. This is the dialog Revit presents to SWTC when you use the File menu > Synchronize with Central. Note that you don't get a dialog when you use the toolbar button instead. That is a quick SWC and it does not return User Created worksets either. 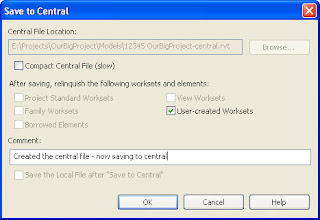 Note the check in User-Created Worksets and the comment. Do yourself and anyone else who works on your project with you a favor, add a comment. Put something meaningful in each time you bother to SWC. This helps track down a problem later or to determine how far back to go when you must start "over" again at an earlier point in the project's design phase. These comments are visible when using the File menu > Show History or Backups features.

You now have a Central file ready for your team to begin collaborating!

Okay...you got me! There is a fifth step!

File menu > Close - This closes the central file and from now on nobody should work directly in the central file, as a rule. There are exceptions to the rule but that is a different post.

Now on to creating your Local Files!

Revit Workset Quick Reference
Posted by Steve at 8:00 AM

Great Article- Many thanks

I want to deny permission for copying media file over a local network. But i want users able to read it.?

Brad, paradox alert! As far as Revit is concerned every user who is expected to contribute to the project must have full access to Revit project files and in some cases other resource files.

If you want to lock things down you'll have to do it with some sort of other kind of separation, such as servers/folders, to keep people out of other areas.

In my experience locking things down like this ends up creating "new" locations for things to get placed where users have "better" access...human nature I suppose, hunting for freedom.