Working in the Central File - Breaking the Rule

You've probably been warned a multitude of times to stay out of the central file. You may have even had this angry baby tell you off? When is it okay to work in the central file? Never...except...

Keep in mind, most of these examples should only be done while others are NOT working in local files!

Security Guard mode - You want to make Revit interfere with users who seem determined to delete or move important elements repeatedly. This can be done by checking out a specific workset like Shared Levels and Grids for example. Then when you STC you "refuse" to return the User-Created Workset. This should be done in the central file using a special username, different than the rest of the team like Super Admin for example. Keep in mind that this is merely a modest hurdle for an experienced user to get past but it should deter the average user enough to point out that they were getting in harms way.

Managing Linked Files - Linked cad files and Revit models have a way of "disappearing" when they are managed in local files. At issue is the assumption by Revit that a linked cad file or Revit model should not be loaded into other user's local files for them. Revit expects the user to decide when to load them. If these linked files are managed in the central file the changes to the central file are taken more "seriously" by Revit when others use STC to publish and acquire any changes to the project. Users should avoid using File Manage links in local files. Use Visibility/Graphics or Temporary Hide/Isolate to manage the short term visibility of linked data files instead. Naturally any such links that are not needed should be removed as soon as possible.

Making a new Central File - You can use Detach From Central (DFC) to create a new central file instead but it still involves at least selecting the original central file. If you don't use DFC then you use File menu > Save As > Click the Options Button and check the option: Make this a Central file after save. This dialog option: 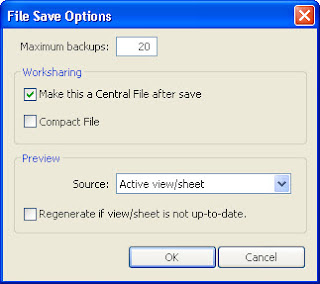 Note: You can also use DFC on a local file.

Working by yourself - If you are the only person working on this project routinely and you just want to take advantage of collateral benefits of using worksets then you can just work in the central file. There is nothing wrong with working in a local file instead however and it is even a good idea as it gives you some additional redundancy should something go wrong with your network or computer(s).

Clean Up after Others - Sloppy workset use means lots of elements on the wrong worksets. It is easiest to clean up after everyone when nobody is working in any local files. Open the central file, borrow every workset and get to work.

[Tip: Check all four workset "show" check boxes, select any workset, then use keyboard combination CTRL + A to select All worksets, then click the Editable button.]

When you are done be sure to STC and return everything you borrowed.

Did I forget any? Lemmeno!

Please guide me that where at Autodesk, Common files for Revit Architecture 2009 are available.

Is this what you are asking for?

Thank you sir, I find it in the Training Tutorial Files. Also Sir, Please refer me a Blog on Rendering with Mental Ray for RAC 2009.

Please guide me: -
Sir when I m doing modeling in RAC 2009 then processor is working hard (I assume that it is utilizing RAM), when I check utilization of RAM in Task Bar, than it is normal and steady between 500 & 600MB. I mean to say while modeling, the utilization of RAM must increased (thats why processor is working hard). I doubt that Revit isnt accessing whole RAM. Please clear my doubt.
RAM = 2.5 GB.
Processor = Intel Pentium D 3.4 Ghz
Graphics Card = None.

Do these resources r enough for modleing and Rendering in RAC 2009?

I'm not aware of a specific blog for Revit Rendering.

Reportedly Mental Ray can take advantage of up to four "cores". The RAM is not as much of a factor when rendering supposedly.

Revit's implementation of Mental Ray is not the equal of Max Design. Max will render the "same" scene much "faster".

I am NOT a rendering expert!!

But doubt is as it is! Doubt is that Revit is not accessing full RAM, even when the project size is large. In big project, it is accessing only between 500 & 600 MB RAM. Is it limitation of Revit or limitation of Intel Pentium D or some technical glitch?

As I said I don't believe that rendering uses RAM in the same way that it does when working on the model itself. For such specific details you'd need to speak with Autodesk Revit support.

Ohh... Thanks to let us know that Max is Faster in Rendering than Revit. Please tell me in detail that Max is faster than Revit in rendering.

I upgraded from Revit Arch 2008 to 2009 for the sake of Mental Ray Rendering. But After listening from u that Max is better than Revit in Rendering I m feeling ditch.

First let me clarify something. None of your questions have the slightest thing to do with this particular post. I wrote that for the benefit of anyone else reading these comments.

Max is a computer modeling/rendering application whose sole purpose is to create 3d environments and then render and it can do animation. You can make movies with Max like Maya. Major motion pictures use either for their CGI effects. So it should not be surprising that it will outperform Revit for rendering.

Mental Ray was added to Revit to provide a way for its users to get a good quality rendering without resorting to external tools. If you wish to document a real project with Revit you can choose to use the internal Mental Ray or export via FBX to Max, among other possibilities.

1) RAC 2009 and Max 2009 have the greatest integration via FBX format. This is brand new. 2008 can export to dwg and link into MAX but it is not as effectively implemented. The 2009 integration isn't perfect but it is better than any we have had.

2) Either...it is up to you. If you do so in Revit the materials and cameras will transfer to Max.

3) 2009 is a much improved version on all accounts. It is never a good idea to stay with an old release for long unless you wish to harm your ability to collaborate with other Revit based design/engineering firms.

Have you visited www.AUGI.com? You might want to visit there to get a broader cross section of opinions.

You should also visit the Max user community at The Area:

Oh, you asked before about Max blogs...The Area has several that I forgot about, sorry.