[EDIT: This issue has been fixed in new versions of Revit MEP]

The graphic issues related with panel schedules and the needs of electrical engineers has been pretty well documented in various discussions at AUGI so I won't pick on them too. This issue however I don't recall seeing brought up yet.

We now have Spaces instead of Rooms so "we" have more flexibility over where and how they are used, not to mention that Zones are aware of Spaces too (the subject of another post). Panel schedules (Distribution Board Schedules to others) however do not derive their location from Spaces rather they only derive this information from a Room. This seems an oversight to me since otherwise I have no reason to create any actual rooms in the RME model. Especially since the Heating and Cooling Loads tool only detects Spaces now and that Copy/Monitor no longer includes Rooms.

Here's what I'm referring to on a panel schedule. 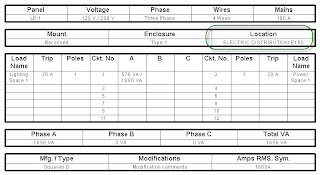 Speaking graphically, I think that I can get a panel schedule looking "decent" now apart from some more information that most engineers indicate they want included (conduit size, wire size specifics etc.). The width of the overall schedule is controlled by one important grip. 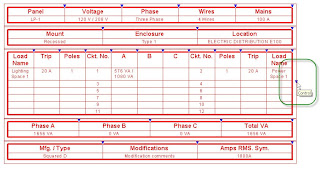 This grip will adjust all the columns together and keep things more or less orderly. It would be good if this width was easily defined so each schedule could be consistent as well as snapping to each other like other schedules do. View templates don't extend to them either. Of course we can sketch some detail lines to use as a guide to get them "close enough" but it would be nice not to have to jump to so many little hoops. All right I did say I wasn't going to pick on them...but it is sooo easy. *-)