When I was attending the Revit Technology Conference 2009 or RTC09 in Melbourne last June we had session for Tips-n-Tricks. A panel of users convened earlier to put together a nice stack of ideas. As the session went forward someone on the panel tossed out a tip and then opened up the conversation to everyone. That process repeated for the whole of the session.

One tip that surfaced during the discussion was to add the telephone extension to a person's Workset username. Apparently he has users who aren't sitting right next to each other. I know, how odd is that? Must be unique to Australia I figured. Back to the tip, doing this makes it easy to contact them when you see them listed as "interfering" with "your" workflow.

The idea resonated pretty well with the room and I wish I could remember who it was that actually put it forward. Maybe this post will help me find out? Here's a gratuitous photo of some RTC revelers. They let some short people into this conference don't they? 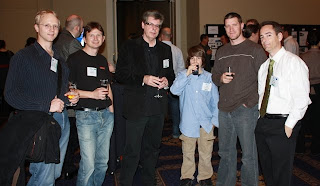 The reason I decided to post this tonight, after all this time, is that I met someone who likes to do the same thing here in the States too! It reminded me of the RTC conference tip. Oddly enough they have people who are not sitting right next to each other too?? You say, No WAY! I say, WaaAY, duuude. Coincidence?? I guess it isn't just an Aussie problem...

Dave Vaughn, who works at the Stanley Group, mentioned to me that he likes to put the phone number in the username. Their great minds think alike. It's nice subtle tip, could go in Dept. of Subtle too! 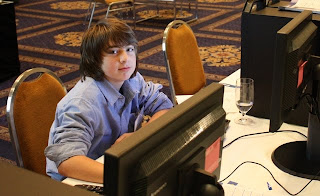 Pictured in the image here is my son Jake, the youngest (and shortest) attendee and nearly furtherest person to travel to the conference. I think Martin Taurer from the Netherlands came further to attend. School had just wrapped up in the States and we were able to have him tag along. He had fun and helped set up the lab computers.

The first image is a collection of us standing around as the photographer wandered around. I'm not sure which one snapped the picture. Thanks to Anna for sending these to me though!! In the picture, from left to right, David Pearce, Kevin Thickett, Bruce Gow (BeeGee), Jake, Heesah Nawtwerinhistag (one of those hard to say Aussie names?), and me. I promise Jake is drinking a soft drink, though that'll still get me in trouble at home.

I added the following image because Jake is "wiped out", sleeping next to me if you look close. We traveled from LA to Sydney, caught a flight to Melbourne, took the bus to town, caught a tram or two and made it to the hotel. Wesley Benn (conference founder and my "mirror image", arms crossed, blue shirts etc), said, "Hey we could use some help in the labs!!" I think we went to bed after 1am...we were both wiped out!! But the next morning we were in sync, time zone adjustment done! 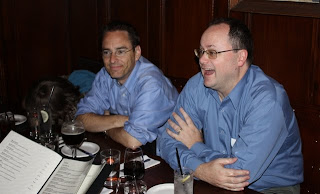 Steve, That suggestion was by Glenn Jowett of Opus. Are you attending RTC 2010? I just got accepted for 2 submissions, now the work starts!

Hope you can make it out again

Yes, that's the plan! See you then!