The last issue of AUGI | AEC EDGE was supposed to have an article by my friend Bruce Gow (aka BeeGee). Somewhere somehow someway...it didn't show up. He did his part. I submitted it but never caught that it didn't make it in the magazine. Some editor huh?

He suggested that I could fix it by providing him with Laphroaig. Here you go Bruce...square now are we?? 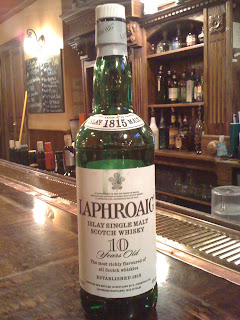 The Irish pub across the street from my hotel, Paddy Murphy's, was kind enough to let me take a picture of the bottle. It's better this way Bruce, no hang-over! I stopped by just as the Super Bowl was decided and had a nice Smithwick's night cap before returning to my editing chores. Bruce, the article will appear in the upcoming issue, Scout's honor.

Email ThisBlogThis!Share to TwitterShare to FacebookShare to Pinterest
Labels: Alcohol, Friends, Off Topic