I've been reading a thread at Linked In (in the BIM Experts group) lately that started out with the premise that people who use/chose Revit only did so because of the influence of Autodesk and that they most likely already used one of their products, namely AutoCAD. The assumption is that if they hadn't been stuck or biased for this selection and had given other applications a fair chance...they'd have chosen something other than Revit. The thread was started by an ArchiCAD proponent and it is the software most represented by other responses, other than Revit. One person supports Bentley's products in the discussion. Technically there are only a handful of respondents and naturally everyone believes they are correct.

I stayed out of the discussion except when the subject of using Remote Desktop Server technology like discussed in the "BIM and the Cloud" article was brought up. It was published at AECBytes and mentioned in an earlier post. It's my opinion that the way it was mentioned, as it relates to Revit, in the thread wasn't accurate. It's my opinion that every aspect of a firm's technology infrastructure stands to benefit from the technology and that it also supports scattered Revit project teams and staff is a win/win.

This evening I was reading the post at the Harvard Business Blog post regarding Twitter and data visualization. I thought I'd use these four Twitter data mining tools to see how Revit and Archicad compare in the Twitterverse. I don't think they are particularly meaningful or even useful, but they make nice images? All four of these examples are hosted at Neoformix. The site title reads, "Discovering and Illustrating Patterns in Data".

This is from Twitter Venn. Use three words to see how they stack up in tweets. ArchiCAD includes the acronym CAD so I'm not sure how much is the complete word or just factoring CAD. I'm not trying to discount the product but the other two words are harder to find used in other common usage. BIM clearly is hotter! The image remind me of a microscope's view of bacteria on a slide and if so clearly BIM is a more active virus. 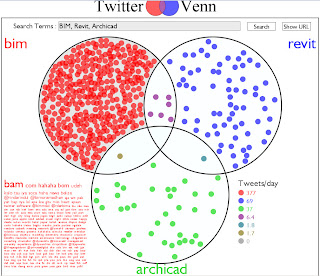 This one is from Twitter Spectrum. Enter two values and see the related terms found for each keyword. Interesting that NEW is part of the Revit collection and PASSIVE is part of ArchiCAD, though I suspect it isn't passive, as in the opposite of aggressive, rather passive solar energy. I suppose that ArchiCAD proponents might agree that the marketing of the product has been passive considering how quickly Revit has grown in less than half its lifespan. 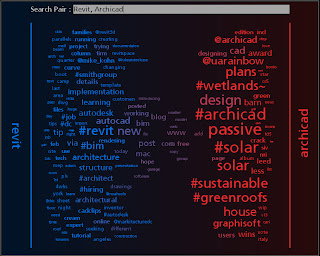 This one is from TwitArcs. Enter two keywords and see the arcs created by the tweets for each. Clearly Revit wins this comparison though from the few arcs on the other side it appears that they are referring to CAD. 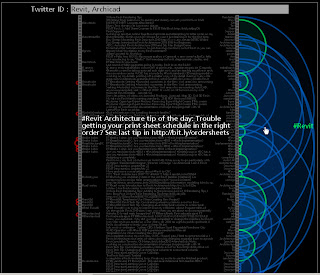 The last two are from Twitter Stream Graphs. These use one keyword and provides the results from the last 1,000 posts. Not sure what to garner from these two though, pretty pictures! 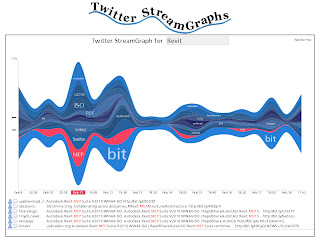 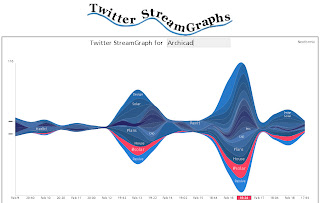 I suppose the title of the blog indicates which side of the fence I fell on? Added this a couple days later. After reading Seth Godin's post, Moving the Line which product has been more successful in the role of "zealot"?