Off Topic - The Guinness Storehouse and Other Musing

While in Dublin, do what a Dubliner would do? While a Dubliner might not go to the Guinness Storehouse routinely a tourist is pretty likely to make the trip. I'd say it's worth it and not just for the free pint at the top of the journey. More on this in a minute.

On the weekend between my assignments there I rode the extent of the light rail system Dublin has, called LUAS. They've got a Red Line that runs roughly West/East and a Green Line that runs North/South. I was staying in the Smithfield area and they have a convenient stop there. The Gaeilege (Irish) name for the stop is Margadh na feirme. I heard it announced by the female computer voice enough that I felt pretty confident saying it (but didn't really have a reason to) by the end of my trip. I also got pretty used to hearing "Stad Eile" (stop, next), except I thought she was staying "stab Ella", painful for Ella!

I enjoyed seeing the countryside from the trains. I suppose someone could reasonably dispute my claim of seeing the countryside since I never really got to the real countryside, beyond Dublin. Next time! If I had more time I would have stopped at a few places along the way. In particular Ranelagh looked interesting from the Green Line train. I spent some time in Tallaght at the far West end of the Red Line. I grabbed some coffee and a croissant and took the opportunity to rest my feet watching a English Premier League game on a REALLY big screen in the central atrium of the shopping center there.

I guess you could say I reconnoitered but didn't have time to look deeper. Both days were practically sunny and warm enough all day that I walked many kilometers in addition to riding the trains. I took this photo from the Guinness Storehouse bar one level below the Gravity Bar, nice blue sky with a puffy clouds. The Gravity Bar was too crowded, for my liking, so I went back downstairs to enjoy my Guinness in peace. 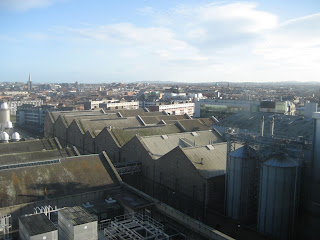 Saturday night I was wiped out and my shoes were screaming. My feet were really angry with me too but I was shocked that the next morning they agreed to do it again! I snapped some photos of various buildings and targeted others while looking at Dublin from atop the Guinness Storehouse. Unfortunately I didn't make it to many of them.

It was ironic that when I started work on Monday that most of the buildings I did visit, unwittingly, were projects that the firm did the engineering for. One particular project was quite expansive and still under construction. It's referred to as Heuston South Quarter. Here's a picture I took while standing on a fire standpipe precariously. The far building on the left is the home of Eircom. 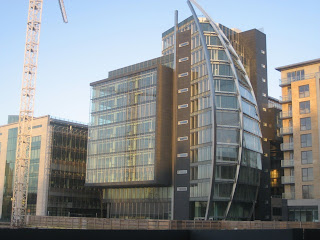 Another photo while standing between buildings looking at the same "Burj al Arab esque" tower feature. Taking the picture I wondered why the ribs don't meet. Apparently they were supposed to. 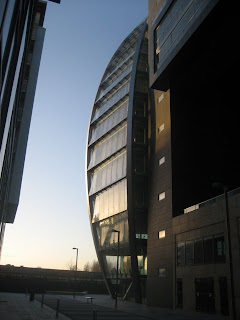 Another interesting feature is the underside of the building over a elevated courtyard. What is difficult to see is the lighting that is part of the design. 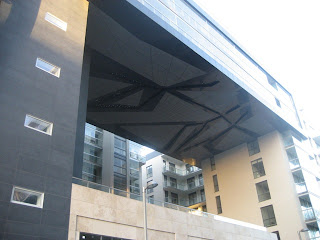 Okay, back to the title of the post. I did visit the Guinness Storehouse. They decided to convert the building into this museum. The building is significant as it is of the architectural style referred to as the "Chicago School" that became prevalent after the Chicago Fire. The site says that it is the first such building in the British Isles, completed in 1904.

Central to the interior renovation is a giant pint glass enclosure comprised of large sheets of glazing carefully intertwined with the existing structure. I didn't know this before arriving and I didn't get it while I was there. It was only after arriving on the sixth floor and seeing the next image that I got it. I'm slow at times, a real duh moment. The image of this exhibit was on the level beneath the Gravity Bar. If you look closely you should see the pint glass metaphor in the center of the complex. 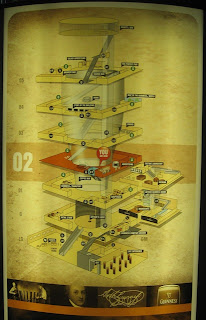 I took this photo looking up into the pint glass before catching an escalator, a couple of which feature an unusual combination of flat sections and sloped sections. It was a little strange to ride "out", then up only to ride "out and over" to the landing. You can just make out the escalator doing this in the right side of the next picture, encased in a veneer of drywall. 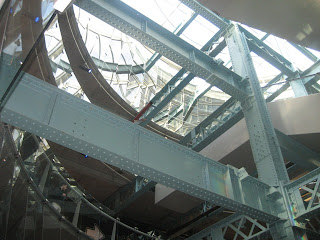 While standing to take the next picture I had this overwhelming feeling that I was looking at Wonka's Chocolate Factory entrance. I know it is nothing like it but the gate and buildings made me think of it nonetheless. The Guinness Storehouse is on the left side of the gate. 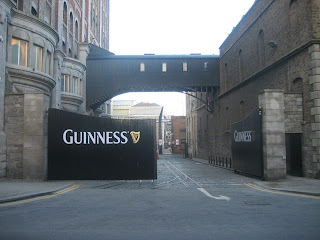 I enjoyed both the work in Dublin and getting a glimpse of the city. Slattery's (the one at 29 Capel Street, not the other one) made it easy for me to get a great pint or two of Smithwick's, a meal and catch a EPL game. It was a blessing that the weather cleared up for the rest of my stay after just a few days of mushy snow, ice and rain. The weekend was beautiful considering the time of year. Till next time!

Email ThisBlogThis!Share to TwitterShare to FacebookShare to Pinterest
Labels: Ireland, Off Topic, Travel