I don't often mention new blogs (or new to me anyway) anymore. I developed a fear that the staccato posting of each new blog I find would get tiresome. Instead I just quietly add them to the list on the side. I revised the naming of the international blogs today to place their language or country first in parenthesis. I thought it would make it easier to find a language first alphabetically and then focus on a blog name. In doing so I came across at least five more international blogs, Russian, French, Dutch and Norwegian.

I contemplated moving the Revit Blogs(Reseller) into the other groups rather than calling them out...and then went ahead and did it.

I added a new link for the Revit Timeline post at AUGI. It lists every version release of Revit since the begining, including point releases and name changes. David Conant started the thread while it was still part of Chris Zoog's website Zoogdesign and I've been keeping at it since then. I also copied it into Beau Turner's Revit Wiki.

I added a custom Google Search to the sidebar which will generate results from my blog and all those I have listed on the side too. Try criteria like "worksets" or "parameters" or "families" and see what kind of results you get now.

When a hotfix was issued recently I decided to add a new set of links to the Current Revit Builds group. 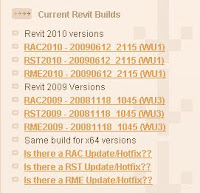 As you've probably noticed I've begun getting back into the notion of using video. I can do a lot more with less time (as long as I don't get too hung up with making good videos) and spending a bit less time writing to describe things as well. Hopefully they'll be useful too.

I added a Twitter widget on the sidebar. Not much of a Twitterer really but I do tweet occasionally. I'm at a conflict with Twittering about my blog posts. I'd rather come up with some other reason to Tweet.

As of today blogger tells me that I have 626 subscribers. Google analytics tells me that visitors come by Monday - Friday in numbers between 350-600 per day. The weekends dwindle which I believe indicates that many of you actually have lives, which is good! I appreciate the continued interest, it makes me feel like keeping on keeping on, Thanks!

Email ThisBlogThis!Share to TwitterShare to FacebookShare to Pinterest
Labels: Blog Updates, Off Topic

It was just this afternoon that I was looking at your blog list and every time I look for mine, I cringe when I see that special spot in the back of the room for the "Reseller" blogs, as it we're in some way biased or our blogs don't equal others.

Put me down as first on the list to move mine into the general list. I've always had a pet peeve about blogs getting listed that haven't posted in over a year or more. I think the blogroll works out better because the blogs with the most recent posts are at the top.

Your list is quite extensive, so good luck with any changes.

I may just make a blog that just lists every single Revit/BIM/IPD/Construction blog out there. The list does seem to grow every day.

But Greg don't you know that all resellers are "evil"? 8-)

You are now in with the other BIM blogs. Going to add individual names to blogs too when their identity is revealed.