Not Editable or Not Edible

This little piece of information confuses people too often, dare I say needlessly?

In the simplest terms, if you see it...that is good, not seeing it...is not. (I know that doesn't help understand why or what it means)

In an attempt to explain it I'll fall back on my library metaphor. We can borrow books from a library, not the shelves. We could try but I bet the librarian would object. We could borrow every book from a shelf, just not take the shelf too. In Revit User Created Worksets are bookshelves (and Revit doesn't care if you take a shelf) and everything in the model is a book. With this in mind these two terms take on the following meaning.

In the workset dialog we want to avoid being listed under the Owner column because that means we've taken an entire shelf and all of its books from the library. Imagine the librarian running down the street after you...okay maybe not. 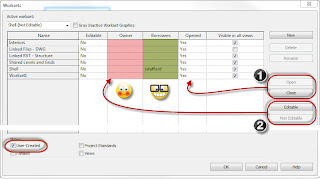 After figuring out what worksets you should create, the most important thing to care about is which workset is the Active Workset. I'd argue that nobody would get confused if (Not Editable) wasn't there at all. The concept of Active Workset is easier to grasp because it parallels the notion of Current Layer in AutoCAD. When you add elements to the model they are assigned to the Active Workset. Simple enough. We can add new elements to a workset even if we are not the owner of the workset. So the notion of editable or not really is a bit too subtle for the typical workflow of Revit users. It's technically accurate but a bit irrelevant.

While I've got the Workset dialog open, I highlighted the Open/Close buttons (item #1). Those define whether Revit loads the elements assigned to the corresponding workset or not. Open means load them up and closed means don't show them anywhere, a global result. Item #2 is for taking ownership of a bookshelf (workset), which isn't necessary or appropriate most of the time. The Editable column next to Owner changes to Yes if you take ownership of the User Created Workset and your username will appear in the Owner column. Don't do that, at least not routinely.

Nice explanation Steve. I have struggled explaining that concept to the Revit users in my office.

Sometimes it comes down to "it just works that way.. don't mess with the central file or you will cause all sorts of damage!"

I like the library analogy.. and the librarian running after you because you borrowed the bookshelves!

are the two "(not editable)" in the last paragraph a typo and should be (not editable) and (editable)? Otherwise I'm way confused

No, not a typo. You either see (Not Editable) or you just see the name of the Workset. Revit only shows the (Not Editable) when it is true. If you take ownership of the Workset it goes away, which as you say can add to the confusion. They don't think it is important to know it is Editable, just that it's isn't. The reverse approach would actually be better than what it does now.

I am now changing my user name to "sstafford" and blaming everything bad on Steve. :D Who deleted all my levels AGAIN!!!

Very useful article, explaining the meaning of these terms that can be so confusing. I wish the Factory would have chosen some better terms. "Editable / Non editable" was really not the most choice of words. What could have been a better term?

Thanks for this. Just getting to grips with Revit, and this has cleared things up a lot!

That's a great explanation Steve. I understand much more betterer than before!

Seriously though, came across this post when looking up opening new local files and that you can set which worksets you can open (All, Editable, Last Viewed, Specify) and it really filled in the missing pieces.

On a previous project, we were having troubles when the model crashed and an element ownership remained with a user that couldn't relinquish the element. Making people own their worksets seemed to reduce the issue since only one person had permissions for that workset.

I imagine this is a good tool for companies that have separate HVAC and Plumbing designers working in the same project. Then the worksets are easier to manage. Tim the plumbing designer only ever has to check his plumbing workset at the beginning of the day, and Vlad the HVAC designer only has to check HVAC. It also divides their responsibility. If something goes wrong or is being drafted incorrectly, you know who is doing it, or reviewing it.

Fwiw, when worksets were introduced it was necessary to use them as you describe. Later they introduced transparent element borrowing which made the experience much more like borrowing books from the library.

Great explenantion. I would´n be so sure about how BAD is owning worksets. If working collaboratively in a projecy owning a particular workset for a white can be more than usefull. Whatsmore you dont have to make editable every element which can be kind of tedious.

For example if wokring in a plumbing model with a linked architectural model you can have the whole think (not Editable) and the workset in wich you´re currently working with you as a owner (Editable).

Same for the other ppl that are working in the same model simultaneously.

DO NOT FORGET TO RELINQUISH ALL YOUR OWNERSHIPS ONCE YOU CLOSE DE FILE OR YOUR TEAMMATES WILL LITERALLY HATE YOU.