I responded to a question at AUGI about exporting to dwg. I decide to repeat some of it here. When you export there are three options for Layers and Properties: 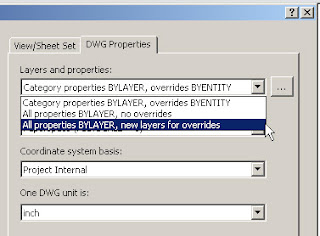 To put this in a practical example, imagine a Revit Grid element which has text, a circle and a line that is usually drawn with a different line pattern than the circle. If this is exported to layer S-Grid and you want entities to use a BYLAYER setting, what should Revit do?

The first option will override the linetype of the line so that it maintains its appearance. It does so by creating a new linetype/pattern in the AutoCAD dwg that matches the line pattern name in Revit.

If you choose the second option you get a solid line for both circle and line which doesn't look so good when you see it or print it.

The last option will create a new layer for the Grid Line, S-Grid-1. You end up with S-Grid for the circle and text and S-Grid-1 for the grid Line. All the elements are By Layer.

If you are still with me, a little reminiscing... I remember a few years back (late 2004 or early 2005) when Jim Balding, my boss when I worked with WATG, and I were on a conference call with David Conant (Autodesk Revit Product Designer) for a couple hours discussing exporting to DWG.

We had just been through a fairly harrowing experience getting dwg files just so for an overseas client that was going to take over the project for construction documents. We even had our in-house programmer and cad manager in Honolulu, Danny Polkinhorn, create a clever little application to redress the dwg files after they were exported from Revit. He affectionately dubbed it "Revit DWG Fixer". One result of that phone call with David was these three options I just wrote about. I'm sure others echoed our desires but the result nearly matches what we expressed then. Not the solution but that we experienced these kinds of layer issues. The solution gave us an option that worked, for us at least. We usually chose Option 3...I still prefer it.

To digress a bit further, it is important to understand that the intended purpose for exporting to dwg is to create files that can be used as a background for other trades. It was never really intended to be a better way to make dwg files. Not to make files that a native AutoCAD user could just continue to work on as if they started the work themselves. The resulting files are not created the way a native AutoCAD user would create them. It does a really good job of getting close. Kind of like me claiming to speak Spanish. I know a few words but a native speaker will catch me in the lie pretty quick.

One practical example, AutoCAD users will usually create an overall floor plan file for each floor of the building. Partial plans are derived by using a sheet file that has the overall plan as a external reference (xref). The partial views are showing some of the same overall floor plan file and the viewport is adjusted for the correct scale and location.

If you export the same kind of information from Revit you don't get the same configuration. You get a sheet file referencing a model file that is the literal export of what was visible in the partial view in Revit. This means changing the dwg file of a partial plan is not really changing any other information in any other dwg files. There is an expectation that it does...but it does not.

Rather than driving Revit to create better and better exports I'd prefer that AutoCAD got smarter about extracting what it wants from a Revit model. Consider the goal really isn't for a Revit project to end up as dwg files. Dwg files are really just a common format that lets other firms that are not using Revit interact with the project using their own software choice.

Thanks for another informative post! I would like to expand on this to include a known limitation that can be extremely frustrating when selecting the second and third options:
When exporting to .dwg format (which is often required for government record drawings) user can not export using the "All properties BYLAYER, no overrides" or "ALL properties BYLAYER, new layers for overrides" settings as both of these settings will remove dimensional text overrides along with dimensional leader locations. It is crucial that projects have the ability to map elements to specific layers, removing any Revit filter graphic overrides, while retaining the dimensional overrides. The current workaround forces users to manually correct each file. When exporting sheets containing multiple views with various scales, without using the xref option the linetype scale will only be correct for a given scale. This forces users to export including xrefs then manually bind them.

This was submitted as a support request earlier in the year and the last update I received mentioned that the issue was reproduced and submitted to the development team. (Support request 1-6662145541)

Thanks for mentioning this, I had not noticed this little gem yet myself. That's a shame...because I prefer Option 3!