Grids That Don't Show Up

Revit will not display Grids that are not perpendicular to the view cut plane. Revit developers chose this because they preferred not to convey ambiguity with important datum elements.

A way to work around this involves a generic model family that contains simple lines in plan to provide something to locate properly in a view. It then uses a symbolic line drawn in the Front Elevation to act as a "Grid Line". He places this family in the project at the intersection of a grid and the element that is parallel to the intended view. The line in the Front View of the family then appears in the elevation or section view. 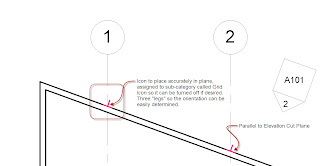 I used a similar approach in the past to create match lines for a project and to display "3D" grids. When I watched the video I noticed that he didn't take advantage of the Reference Planes IsReference parameters and Instance Parameters. Probably just a matter of keeping the video length to a minimum. Doing so however would make the grid more easily adjustable in the view by using grips instead of setting their length via the properties dialog. 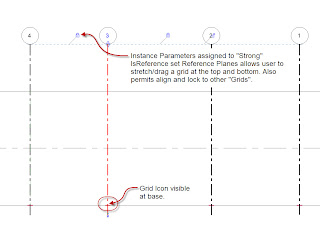 The tricky part of getting the grips is that you don't want to dimension to the Reference Level in the family. You need to use the Reference Plane that is hiding beneath the Level. When you do this then the grips will appear at the ends of the line. 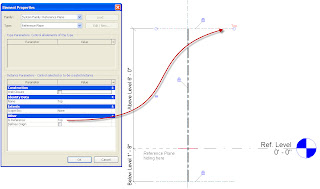 The last part of the puzzle is a tag family for the bubble and grid number. In David's example he put the circle in the grid family and tagged using just the Mark parameter. In my version I've put the circle in the tag too so I don't have to deal with sizing it for the "correct" scale since it could be visible in multiple views assigned to different scales.

I'd prefer to be able to build and nest the annotation for the bubble and mark but in the infinite wisdom of the developers they won't let us place a symbol family in an elevation view within the family editor. Not fair!

(Edit 11/21/2016) Move the following original text from the first paragraph to here because years have gone by and only the fact that David did something in the past for this situation remains available. My post was inspired by his cleverness originally. First paragraph originally included the following sentence.

David Fano posted a lengthy video explaining how he works around this limitation (update: access to the video seems to have been removed since).
Posted by Steve at 8:00 AM