Another Side of Mr. OpEd

I have friends who are musicians first and have jobs second. I have friends who have jobs and happen to play an instrument. Although I have played drums since I was fifteen and been in bands for many of the years since I have never told someone that I'm a drummer first and a something else second. I guess that means I'm not a professional musician though technically I made a meager living as one in my late teens. I don't think of myself as a drummer first...funny how we can "pigeon hole" ourselves.

The band I played with the longest was called "Angry Neighbors" as in we've got them, angry neighbors. I don't even remember when we started playing together exactly and I'm even fuzzy on how we got connected. It was just a three piece outfit, drums, bass and guitar. Two Steve's and a Mike...pun intended, Mike played guitar/harmonica and sings like a birdie. The two Steve's just looked good in the background...well we tried. 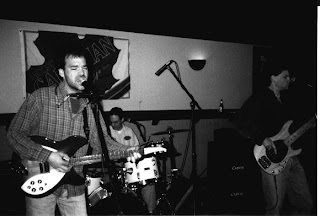 We started out as a "B" side band that only played the stuff we wanted to. As you can probably guess there aren't that many places eager to book a "B" side band. So we played some "A" side stuff too and that helped. We also found we enjoyed playing original stuff that Mike wrote over the prior years in various bands. So we started focusing as much on that stuff as anything else. This didn't increase our marketability and our meteoric rise to fame has been in a long flat line...no rise except for a week in 2002 or maybe it was 2003...when we played a clam bake and of course...it rained! Check out the glamorous back drop! 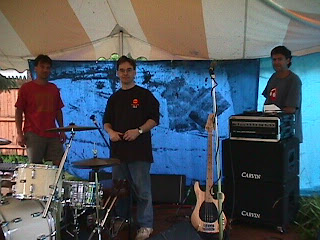 We recorded a live gig and played haphazardly with recording in the proverbial basement. We were three guys who had jobs and played instruments when we could. It was a great outlet! We could get together next weekend and sound like we never stopped playing, just a strange sort of comfortable that we enjoy. We occasionally would practice whether we needed it or not! When someone asks me who we sounded like I'd say either, "We are easy to listen to but not easy listening" or "Imagine Neal Young and Tom Petty had a kid and he was Matthew Sweet"... Doesn't help much does it?

Then I messed it all up by moving to California! Mike and Steve went on to team up with The Z-Bones and then Steve stopped playing out for the most part. Mike is still at it! Me...I've been on my longest playing drought ever. I've been planning to pick up an electronic set so I can play "quietly" at home for months and I've just never checked off that to do item.

I've posted three songs that anyone who is interested can download.
Book of Love is a basement recording, Turn it Off and Half a Man are a live recording (board mix) of one of our occasional gigs.

We are on the slow trajectory for stardom...(in our own minds!) The latest news is that we are kicking around the idea of working electronically via Garage Band and seeing what noise we can make! I guess I need to get that kit!

You clearly NEED to get that kit. All Revit and no play make Steve...

Well whatever it "make Steve" it can't be good. :)