Fwiw, I wrote these related posts: this one in 2005 and this one in 2006. This is ONE Too, it's about creating openings when we use Copy/Monitor (it's still not a good idea unfortunately).

A recent thread at RFO started off by asking which method is best to create openings in walls. There are a few options: Family (like a door, window or generic model opening family), Wall Opening, Wall > Edit Profile, Automatically Embed feature of Curtain Walls or even an in-place wall with a void.

Like anything understanding their differences is important. For example if I need a round hole in a wall I could use a jigsaw, sawzall, Xacto knife, sledgehammer, hole saw, drill bit etc (or dynamite). Depending on the size of the hole I need any of those could provide a hole with varying degrees of accuracy, success and effort.

Revit's Wall Openings, apart from being a bit weird to use, affect room bounding differently than other techniques that cut a wall. In the attached image:

Here's what the model looks like in 3D, the view range cut plane for the plan view above is the typical 4'-0" (1200mm ish). If the wall opening comes into contact with the Computation Height of the host level it "affects" the room bounding. Added a wall opening (like a window) to the middle building. 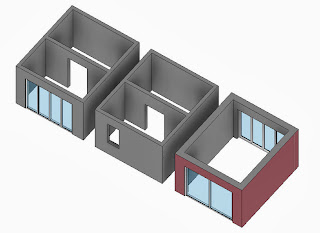 By the way for trivia fans, Jeff Hanson (Autodesk SME, User Experience) wrote: "... the wall opening tool was created specifically for creating a wall opening in a wall that is curved in plan. There is no way to edit the profile of a wall curved in plan..."

Added this image in response to a comment from Rob (1/3/2017). I used Edit Profile and Wall Opening to create the openings and then placed Room Separators to decide which room should get the area between them. 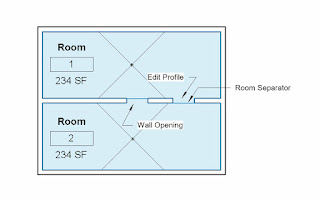 building number 2... is there a way to calculate to finish face, but also include the space made from the "door" opening between the two?

I'm sure there is, i'm not remembering it though! :(

cause the reality is, now you aren't counting that area, but it CLEARLY still exists. We have a similar condition and the wall in question is 24" thick with a 6' wide opening, that's about 12sq.ft. of missing area/space to be calculated and shown.

Rob - You could either Edit Profile or use Wall Opening to create the opening and then place a Room Separator within the opening on the side of the wall you want the area to stop at...or in the middle to divide it in half.