I wrote supporting documents for two presentations I did about using the family editor and creating door families, they are:

I also wrote an earlier post here and shared A Door's Life as a Box embedded document.

I recently responded to questions about the techniques the older handout describes and then, as the thread grew, later criticism at RFO that my second document does not live up to their experience with the original. The following stream of consciousness is, for the most part, my reply there. I have rewritten parts of it so hopefully it makes sense here apart from the thread at RFO.

If you work through each document, or have already, the following describes what I experienced writing the newer version; why I didn't find it practical to just "refresh" the original, though I did start out thinking I could just do that. I started by opening the AU 2005 BD21-1L handout word documents and using Save As. Fwiw, that document was created using Word's Master and Sub-document concept (think Xref's for Word), each section is a separate document linked to a master for formatting, style setting and page numbering.

When I first started pondering (over 18 months earlier) what became "A Door's Life" I was thinking about a session for RTC in Europe. Coincidentally I received two suggestions via email within a couple weeks of each other recommending the AU 2005 handout should be updated. One even said he'd do it and submit it as a class for AU, asking if I'd have any objections. I wrote back that I didn't have any objections. I don't think he did it though, at least not that I'm aware of.

Reviewing the original outline I added the section about nesting hardware because its more common outside the USA to include hardware in door families (thinking about RTC EUR). I decided to remove the section devoted to creating the nested variable lite panel family with voids because, during the eight years of work and travel I've done since the lab at AU, I've never met anyone actually using it (until the thread at RFO). It's a relatively complicated and labor intensive part of the document too.

In its place I described creating two simpler nested panels, one derived from the first since that's how many firms actually end up going through the process. This also meant I could put the more relevant (especially in 2013 than 2005) clearance form (part of the nested swing) and hardware section in without increasing the page count too much. When CSRW submissions were requested I was already restructuring the handout (it is in imperial units) and I decided to use it for their workshop instead and took a different direction with the RTCEUR session. After a bit of reformatting it became a CSRW session and I finished it.

As such, the final form of A Door's Life is based loosely on the CSRW template, I started with it but I took some liberties. The AU 2005 BD21-1L handout is 48 pages and the font is primarily Arial 11 and based on the AU 2005 template. In contrast A Door's Life is 80 pages (3 pages are the Table of Contents, no ToC in AU BD21-1L) and uses the fonts; Calibri 11 and Cambria 10 (for lists). As a result the appearance is certainly different (see next image). 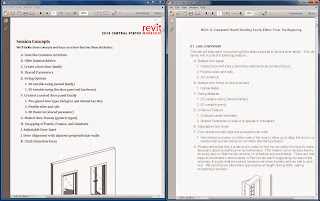 The tips (and additional comments) are a burgundy color to fit the color of the CSRW template graphics (see left image). 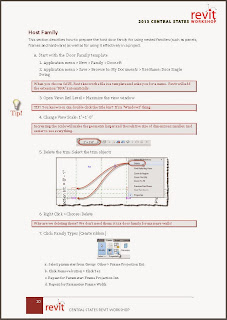 Doing the writing and editing I was immediately confronted with images of the Revit Building 8.0 user interface that included the Design Bar, Menu and Toolbars. When I finished the work I'd ended up replacing nearly every image. Even images that didn't need to be looked so out of place against the new interface that I often chose to replace them anyway. It's like remodeling a room that is connected to others. Improvements in the room make the other rooms look shabby.

There are also the feature and language changes from 2005 to 2013. Every instruction and description that referred to Design Bar tab, Menu or Toolbar had to be replaced with references to ribbon tabs, panels, buttons, properties palette, and other subtleties. There are also new, perhaps better, choices for how to offer some instructions, via right click, palette, view control shortcut bar etc.

There are changes in Revit itself like the behavior of the nested swing family. Between 2005 and present day the swing technique described in the 2005 handout doesn't work anymore. It's necessary to constrain it a little differently, the text of the old process had to go. The nested swing in A Door's Life has more features to describe as well. The clearance form section nearly takes up as much space as the panel/void section did in the AU 2005 handout. The clearance form describes a much more valuable lesson, in my opinion, about constraining sketches as well as the whole concept of clearance forms which isn't part of the original at all.

I think its worth mentioning that over eight years I've changed. I've been affected by the people I've met, taught and all the work I've done since. I've learned a lot more about Revit, this business, writing, editing, document formatting etc. I've done technical editing for two Revit books (beginning another now) and contributed chapters to two editions of another. My opinions and approach to writing and describing things has changed, evolved. I'm a different person than I was in 2005 and I learned a LOT from doing that lab too. I find it hard to imagine I could look at work I did eight years ago and be satisfied with "Save As"...and I wasn't. I also did not intend or expect either document to define a singular process to build "your" perfect door family. I hoped to describe the techniques that can be used together or separately to help organize anyone's own door library and all the concepts apply/extend to any other content easily too.

I closed my response in the thread with "I am grateful that you've found the original document useful and worthy of the praise, that it deserves to be updated. I won't hide my disappointment that you find the newer version not as worthy of your praise. I guess what they say about sequels is really true."

Door's Life is as per presnt context & very usefull for revit users while AU2005 BD21 was usefull for new users as there are more illstrations.
As regarding 2D swing, I still use BD21 technich. I tried to use that 2D swing to display a replica of actual pannel & for normal panneled & glazed shutters it is usefull. Though multilite's replica could not be made on 2D swing.
I have made multy lite door pannel as per BD21 withot using ref planes for stiles or rails and it is working perfectly. Though this is not the proper route, but it is quick & & did not failed.
I shall post this all in one type door to Revit forum for your remark, as it is you who inspired me.

One door frustration that engineers have is how they cut openings in walls when copy monitored. When a wall is CM'd, openings are created based on the door family bounding box. The BB of the door family is defined by the elements in the family farthest from the center of the family. When architects leave things in the family outside the rough opening, like the 2d door swing, the opening cuts too big when CM'd. Do you speak to that in providing door creation guidance? If you could, engineers would really apreciate it.

I do discuss it with people when teaching them about making content. It is really a Revit problem though.

Fwiw, the doors you can create using the second handout (A Door's Life) should provide the same size opening in the copy monitored wall as in the architectural model's wall.