Today is the first formal day of Autodesk University 2013 (AU). It is Autodesk's premier customer focused training and marketing event. It has expanded in recent years beyond USA's borders. This year there are roughly 9,500 attendees (photo pilfered from @architectmag Tweet). 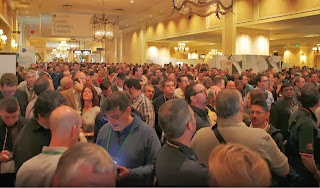 I realized this morning that it's my 11th AU. I missed the 2002 event after attending my first in 2001. Initially I was fortunate that past employers found value in sending me. Later my work with AUGI and my own consulting work has made it possible to attend ever since.
Typically AU starts with the Keynote but this year it began with one stream of classes at 8 AM. Technically these days AU actually gets started on Monday with specialized sessions, some of which come at an extra cost.  I spent the 8 AM session working as a lab assistant to Paul Aubin's Family Editor class.

The Keynote Presentation began 10:30 AM and kicked off with Penn Gillete excoriating the usual Disclaimer slide, "Well that's BS!" (Photo from @BrokHoward Tweet).

Then Penn AND Teller selected a "volunteer" (Autodesk staffer) from the audience. 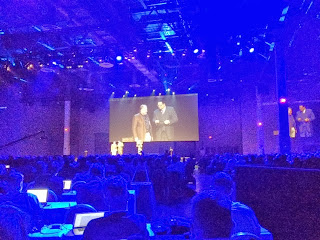 They then engaged in a little magic, taking a pair of glasses from the volunteer and making them appear on Teller who is covered by a box. They turned over the stage to Jeff Kowalski (Autodesk CTO). It's the first time in my memory that Lynn Allen didn't serve as MC (later Scott Shepard reminded me later that she only did the keynote wrap-up piece last year). 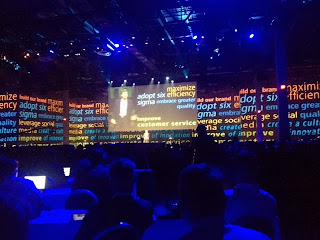 The keynote theme this year is, "The Answer is Outside". He focused on four topics; Tools, People, Work and Insight. I suggest you read Scott Sheppard's "Inside the Labs" blog post to read his recap of the keynote delivered by Jeff and then followed by Carl Bass.

Of particular interest to me was the display of Bot & Dolly's Iris, a robot. This image is of it in action after the keynote concluded. If you haven't checked out their YouTube video you should. It's a very cool technique they'd used to animate camera and graphic motion for film making. 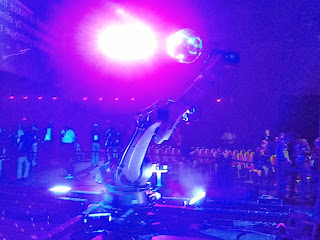 The new Aston Martin Vanquish was also on hand closer inspection, check out Scott's post for a picture of that!

Signing off for now, off to more classes and the exhibition hall opening this evening.
Posted by Steve at 3:59 PM