Saw a request recently to change the "Grand Total" (title as Revit calls it) that appears at the bottom of Revit schedules from Sentence Case to Upper Case. 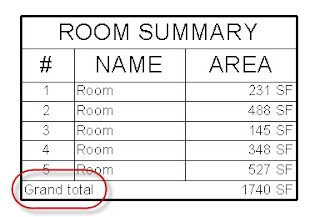 My first reaction was to wander down the path of reminiscing why we use upper case in documentation at all. Going back to hand drafting and reducing the number of characters to master for simplicity and consistency sake. Whenever something like this comes up you can go the route of justification/explanation, "Well, here's why Revit does it that way. I know you don't feel better, but at least you know why though?" Alternatively you can just go the route of apologizing, "Nope it doesn't do that, sorry!"

Something like this request both seems like such a tiny thing to fuss over and still such a tiny thing for the developers to overlook. Why can't we change the "case" of such automagic labeling?? Surely it can't be hard? If we add in localization, making Revit use a different language, there are some examples of where users are stuck with the English text even though the rest of the words on the documentation aren't. I seem to recall the word Scale for the view scale is/was one of those.

If you really want to get your way, you can, not hard...just isn't automatic, you'll have to keep after it. Alter the schedule so it uses the Totals Only option. Then at the bottom of the schedule add a text element that says "GRAND TOTAL". You've got to move this as the schedule expands/contracts. Remember to check it before printing. 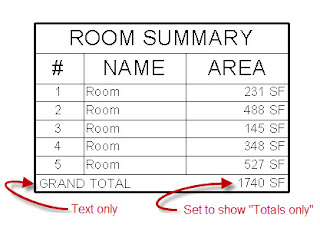 Maybe someday they'll make it possible to change these "little things"? Definitely a Dept. of Reviteristic or perhaps Dept. of Quirky or Dept. of Subtle. Heck all three work for me!

[Added: 1/10/2012] Paul Aubin mentions in a follow up POST that we can use a font that only has upper case characters. That's a trick that a few people I'm met or know from the user forums on the "internets" have used. Assuming you can find such a font that is acceptable it might just work. Remember you've got to make any downstream users also have the font.
Posted by Steve at 8:00 AM

"My first reaction was to wander down the path of reminiscing why we use upper case in documentation at all."

Agreed. I have been trying to get folks away from all CAPS for a while now...

You inspired me to try another experiment Steve. Please see my post over at my blog: http://paulaubin.com/blog/all-capital-letters-alt/

Hello,
And how do you right justify the Totals Text?

It should justify that way according to the parameters though I recall a bug in early versions of 2014 that ignored it. Have you installed the latest build/update?