Worksharing - Central File is being Accessed

I've been reading a thread at AUGI off and on during this past week regarding several people that have projects that repeatedly run into the "Central file is being accessed by someone else..." errors. These prevent them from successfully syncing with central.

At first the contributions to the thread seem to prove that having computers that use XP and Windows 7 involved in the projects was to blame. That seemed a bit too heavy handed perhaps and seems to have more to do with Revit 2012 than the operating systems.

Toward the end of the thread Dave suggested something else: Adjusting the frequency that Revit checks for worksharing updates. Revit 2012 added some graphic display features to helps us see whats going on with our project and worksharing. It turns out that when a the people that were suffering with this situation change their setting to Manual only they don't encounter the situation anymore.

Might be worth trying if you've run into the issue too. Keep in mind that it will affect the ability of Revit to offer up the new graphic display options for worksharing. 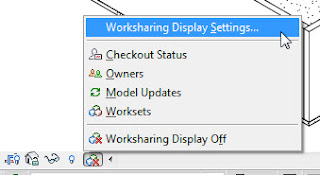 We had the same error working with Windows 7 and the central file housed on a W2008 server. Move it to a Ubuntu server solved the problem.