I got a question via a tweet the other day.

Q: "Is it possible to model a parallel kick conduit run in Revit"

The tweet on its own wasn't enough for me but I also saw the same question at AUGI. Same person or not I find that this sort of thing happens often enough, similar questions percolate up into the internets. The description "kick" was what lost me as I haven't heard that term used before. I've mangled plenty of conduit in my past but apparently didn't get out enough for that.

The description offered up at AUGI helped me get a sense of it though.

The responses varied from, "too hard to bother", "why worry about that level of detail", "sure, here's a video" and a couple from me taking advantage of the 2012 "Ignore slope to connect" option. The original post was asking about 2011 and the responses that suggested that it was too hard or not worth doing are closer to the truth perhaps for pre-2012 versions. It is definitely a "labor-of-love" to pull off in 2011.

Here's a few images depicting what I thought was being asked for. 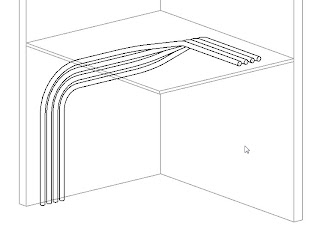 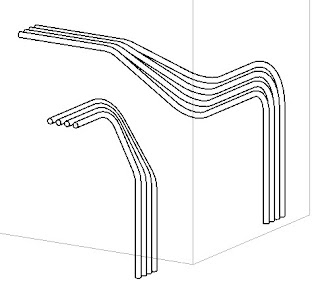 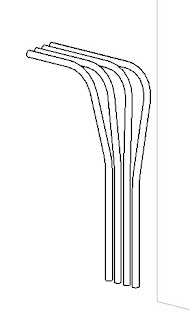 Here's a Video and a Video.

I also ran across some useful installation information at this site when I was curious about the term "kick". After reading through I'm not convinced my images or video are really "on-point" since the vertical conduits use 90 degree angle bends to turn across the ceiling and the "kick" is the bend to change direction parallel to the wall. The layout described on this site would be much easier to accomplish in either Revit 2011 or 2012. We just need to sort out where to start and stop so the angles and layout is neat and consistent with what this site suggests. Perhaps it would look more like this then: 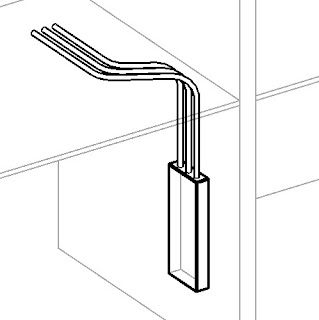