Dept. of Off Topic: Teena Marie

I read last evening that Teena Marie passed away at just 54 years of age. As you may be able to see in the picture below I did a short tour with her in March of 1985. A hasty mug shot with me "hanging" from my lanyard. 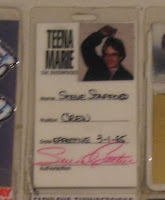 We traveled up and down the west coast for just over a month. It also involved a drive with Tim, my lighting crew member, from Atlanta to LA for rehearsals and a solo drive back to Atlanta at the end of the tour. That drive home was interesting when the truck's engine seized up outside Phoenix. I ended up transferring the lighting gear into a different Ryder truck a day or so later to finish the drive. Now that I think of it I had a truck seize up on me during the Rick James tour too, hmmm. Maybe I'm just hard on trucks?

The week before the trip home to Atlanta I got to travel to Honolulu to do the lighting for her at a record company event, she performed the Tempatation's song "Sugar Pie Honey Bunch" with Carly Simon and Cyndi Lauper. I didn't meet either of them but it was a sweet gig nonetheless. If I recall it was about four days in Hawaii, at the Sheraton Waikiki, for about 30 minutes work between rehearsals and the less than five minute song.

It was a life lesson too because we didn't continue on with the rest of the tour because I failed to develop a trust relationship with her. It was my first legit LD gig (lighting director) and in my previous tour roles as a technician I was accustomed to giving an artist their space. I didn't realize that this new role required the opposite of me. Essentially my naivete cost the company the next leg of the tour, or at least contributed to that result.

I often wonder what has become of Barney and Peter (with Electrotec, the sound company which no longer exists under that name if I remember correctly) or Tim my lighting cohort. Peter introduced me to my first pint of Bass Ale and the Cat-n-the-Fiddle pub on Sunset Blvd (an interesting place, English pub in a cantina setting, still there too, drove by it a couple months back).

First Stevie, later Rick James and now Teena. It may be inevitable but we don't have to like it. It's been a long time since my brief tour with her but I wish Teena's family, friends and fans all the best, despite the circumstances.
Posted by Steve at 7:30 AM

Email ThisBlogThis!Share to TwitterShare to FacebookShare to Pinterest
Labels: Dept. of Off Topic, Music, News