While people were having their heads scanned and visiting other sundry exhibit booths I visited the folks at Infinite Z. They were right on the back of the Imaginit booth.

From their product page
...snip
Infinite Z’s revolutionary virtual-holographic computing platform is an intuitive way to experience information, using virtual-holographic imagery and a multi-purpose stylus to directly explore, examine, explain and exemplify. The zSpace platform is comprised of innovative hardware and software, working together to greatly expand human perception by presenting unprecedented lifelike images appearing above and below the display surface.
...snip

You don a pair of glasses, grab a stylus, (laser sort of pen) and you point the pen's beam at the 3D holographic object on screen. It appears to be right there in front of you, floating. In the example I saw they had a robotic hand assembly loaded and I could select different parts and move them around, spin the part, zoom in and out to get a closer look. You pick different tools by pointing the pen's beam at them. Imagine your holding a pen and a yellow shaft of light extends from the tip toward whatever you point it at.

What can I say other than my words aren't doing it justice, wow! 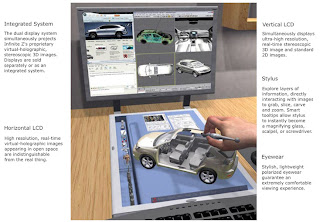 It is still early days for their product and they weren't even sure how much it might set you back yet. Keep an eye on them!
Posted by Steve at 7:11 PM

Was extremely fun to play with, but seemed impractical and likely to find a limited usefulness in the AEC design market.