I've stayed in a few over the years. Between traveling as a roadie, theater technician, convention services and now consulting I'm not sure I want to know just how many. I'm not an expert on hotel rooms or what most people expect from them but I do know what I like. I'm not after extravagance. My typical choice is Hampton Inn or Hilton Garden Inn or Courtyard Inn by Marriott. They are consistent, have a meal in the morning, free internet and almost always reasonably fresh/new. Two things will ruin a hotel stay faster than anything for me, the shower and the bed. If I can't sleep or have a nice shower in the morning it's hard to get going. Why this post now?

The night before, in the Boston area (Lexington to be exact), I stayed at a hotel called Aloft by Starwood.

It's a new hotel that features interesting design elements giving it an upscale feel at a mid-range price. Overall I liked the hotel but for some reason this one poked at me repeatedly causing me to think harder about it and its design.

To start with, take the front entrance, two automatic sliders that are offset, from one another, so you have to enter at an angle. The first door slides left from the right side and the second door slides right from the left side. The openings are mirrored from each other but their overall width is aligned and the same. Cool if the angle pointed you at the front desk but it points you toward the lounge. I also would hate to be in a hurry out of the hotel in the event of a fire since I'd be inclined to run out the first slider and head straight into the fixed glass of the second, ouch...my nose! 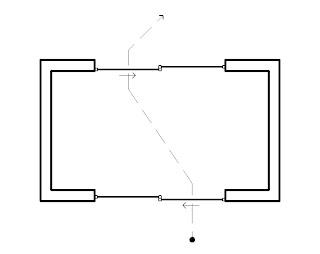 Once I got to my room the door featured a sliderless key system, just touch the key to the "fob" on the door. At least I don't have to figure out which side of the key to slide. Inside I found the room turned ninety degrees compared with most hotel rooms, the bed facing the exterior wall. The appearance was quite modern and nice. Note the window at the left side of this picture. It is frosted glass and looks into the shower stall. 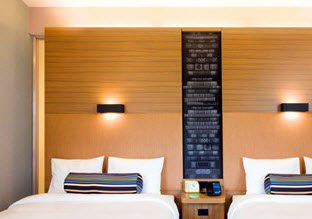 My focus turned to the windows since I was on the ground floor. I wanted to close the shades which were operated by chains and had aluminum guide tracks at each side. It was a bit hard to reach them and unfortunately the fit and finish was pretty bad. The shades didn't stay in the track and one window's shade wouldn't completely close off the window. For exhibitionists it's no problem I suppose? I ended up climbing up on the desks to try to get them in their tracks again.

I wanted to get my phone charged up. It baffles me when I go to hotel after hotel and find they don't put a convenience outlet near the bed. Most are buried behind a bed or just far enough away that you have to put your phone across the room somewhat. In this case I was intrigued to find what was a great spot for me to plug in except it was filled up with the rooms phone charger and clock. The switches for the reading lights over the beds took up the rest of the space. I saw something underneath that kept me optimistic till I realized that it was a RJ-45 jack and empty slot for something "else". No big deal I suppose, no chance I'd use the phone so I unplugged its charger. I use my phone for my alarm clock anyway so the perfect setup for me is the iPhone ready clock/radios that some hotels are starting to use. 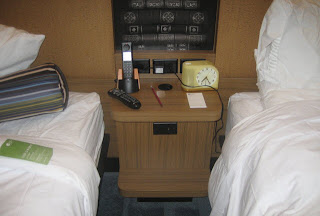 The new light fixtures used in hotels are terrible for a guy in his forties who needs to shave. It is as if the designers are chuckling to themselves, "yeah, let's see him try to shave in this room heh heh!" The "green" "sustainable" lamps just don't put out the color temperature I need to see with my aging eyes. The only rooms that really work for me are the ones that have the magnifying mirror with integral light. I don't need the magnification, just the concentrated light source. I muddled through it here.

The arrangement of stuff in a room is always interesting to me. When you stay in a lot of hotel rooms little stuff starts to pop out at you! The trash bin under the sink was at the end by the sink but the tissue container was at the other end. Plus the bin was right where your left toe wants to be while using the sink. The bin ought to go at the other end methinks. The placement of the refrigerator seems like an after thought, "Oh, nuts we need some place for the refrigerator, ah this'll do!"

Speaking of little stuff. I stayed at an older hotel once that had a small mound of what looked like kitty litter next to the dresser. I noticed it the second night and watched it for the rest of my stay just to see if it would get noticed by the cleaning crew. It lasted for all but the last two days of my stay (two weeks!). I also find it interesting to see when I get a bath mat or not, how many days a tissue box goes unfilled, to see how they rearrange my stuff each day in the bathroom etc. Sometimes they replace the shampoo and soap every day or every other day or not at all. It is also fun to see what cleaning stuff will get left in the room from time to time. A bottle of glass cleaner sat on my sink counter for several days one time. What an intriguing life I lead eh?

Another item, the shower. These cool shower heads that are supposed to rain on us, no thanks. Most just feel like I'm getting rained on instead of taking a shower as it is supposed to be, a nice drenching rain instead! That and reaching the shower controls, it would be nice if we could turn on the shower without getting frigid cold water on us at first.

The room included a large flat screen TV and a remote device to allow you to connect your pc or other video source into it. Shame that it doesn't include a set of cables. I don't travel with a VGA cable though I suppose others do. Not like I had any time to really use it though. If you visit the hotel site you can see some pictures of a typical room, like this one. 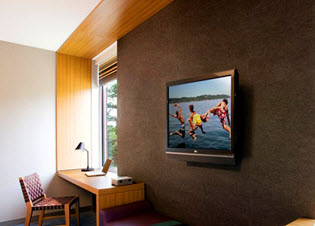 As a wrote earlier I liked the hotel and their staff was great. I'd stay there again but it is odd that it provoked so much thought about it and hotel rooms in general. As you were!
Posted by Steve at 11:48 PM

I completely agree. So much so that you inspired a post on my blog. See it here: http://paulfaubin.blogspot.com/2010/04/echo-off-topic-hotel-rooms.html