Are you a Good Sketch or a Bad Sketch?

Aah sketch mode. What a picky feature! It wants nice clean perfect sketches. It is a pass/fail proposition, it works, it doesn't. I think of electrical circuits when I think of sketch mode, as in "open circuit" and "short circuit". I also think of tool paths for a CNC machine or the laser cutter/etcher you use for model making (some of you). I also think of Jeffrey McGrew and his Shopbot "Frank". Yes he named his machine. Anyway these devices like clean endpoint to endpoint sketches. A bad sketch means damaged work or in some cases even a small fire?

In yet another life of Mr. OpEd I worked for the theater equipment manufacturer J.R. Clancy and we had a sub-contractor that used a CNC machine to cut the side plates, out of steel, for the rigging loft and head blocks (pulley assemblies), among other things. They used to be fairly casual about who could create the drawing for them to use to cut these steel plates until someone sent one with a "Bad sketch". After the shop foreman and management apologized profusely for the trouble it caused only ONE person could do the job thereafter. No...thank goodness it wasn't me that caused the problem, I think?!?

Here's a graphic of good and bad sketches. Be a good sketcher, keep Revit happy! 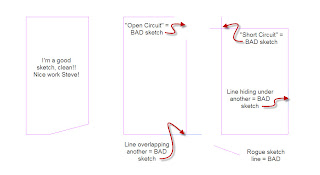 It would be nice if Revit would fix bad sketches since it is smart enough to detect that a bad sketch exists! See? One of a few versions of this complaint.

It does however try to show us where the problem is and then waits for us to figure out how to resolve it. That's something I suppose.

Email ThisBlogThis!Share to TwitterShare to FacebookShare to Pinterest
Labels: sketches

We named it Frank because it's easier to refer to than "Shopbot PRT96 4G Standard". ;-)

Also some of the sketch-based MCAD tools (like Alibre) have 'sketch helpers' like you talk about here, where they point out the problems in a very helpful way and even fix them for you if you want. A feature I've wanted for a loooong time in Revit, I think I brought it up four years ago or so.