Revit Structure does not have a tool to create a ceiling plan, not on the Design Bar.

Not on the Menu either... 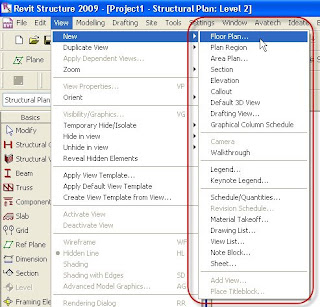 The reason is that, for the most part, structural engineers don't use them. In another post I suggested that feature for feature we could get away with just owning Revit MEP and Structure and get everything that Architecture has. I mentioned the lack of ceiling plans as one negative and a comment left said that you can create a view oriented like a ceiling plan despite the lack of a specific tool for it. I finally remember to mention how... you create a new Floor Plan type and alter a setting as shown in this image. 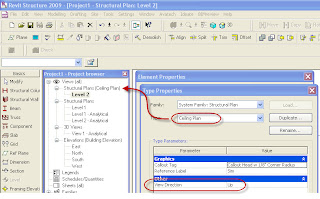 "Ceiling Views" are looking "up"!

Why? In 34 years of being in the Structural Engineering I have never needed to develop a ceiling plan. So what the point?

Apparently you haven't been in the business long enough? *-)

The lack of the feature has come up a few times in posts at AUGI and in classes. There is a way...though apparently not needed at all...or much.

Hey nice! That was me that originally brought this up!
While yes, I have yet to need a ceiling plan in Structural Engineering Industry, we found that Revit Structure could do it because one of our template files was set up like this and we couldn't figure out why nothing looked right.