That Other Side of Mr. OpEd - The Rod's

Once upon a time...back in those 80's I did some work with a group called The Rod's. The "internets" (a "Bushism") is/are great for dredging up stuff! 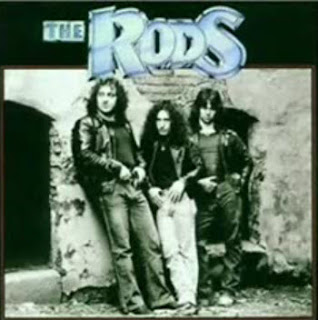 This album above is the one that I was familiar with at the time. This group was, then wasn't (broke up) and now is again, a three piece act based in Cortland, NY. If you've never heard of Cortland, it is 20ish miles south of Syracuse, NY...did that help? The color or lack of color on the cover always reminds me of the Led Zepplin album cover of the same title.

I worked for a lighting company called S.K. Lights for almost a year (flash forward 10+ years and I did another tour for SK Lights, new owner, with Soul Asylum as the rigger) and these guys were a relatively regular client that hired us to do their lighting. I don't remember how many clubs we spent time in but it seemed like a bunch. One particular highlight of working for them, for me, was their pretty amazing drummer, Carl Canady. Here's a link to a video of a solo he did during club date during 2008. Their song "Power Lover" is one that I remembered and was pleasantly surprised to see a bunch of their stuff on YouTube now. A year ago there was one video, now there is a bunch.

Some notable trivia - The group's guitarist David "Rock" Feinstein played in a group called "Elf" with his cousin Ronnie James Dio who was lead singer for Black Sabbath in later years and Ritchie Blackmore's Rainbow. Does the Rainbow song "Man on the Silver Mountain" resonate?). Also interesting is that they (The Rod's) were scheduled to do a UK tour with Metallica as their opening act in 1984 and the tour was cancelled because of poor ticket sales. Hmmm, is that THE Metallica? Yep...

The heavy metal era doesn't die it just goes grey and gets louDER!

They didn't hit my radar (and I'd imagine I'm not alone) until I saw their 'One' video on The Chart Show in 1989 when I was still at school. I immediately took up guitar, grew my hair and pledged my allegiance to ROCK.