The bias of the last three posts has been on creating a Master Site file and linking building models to site. That's moving buildings on a fixed site versus moving the site under fixed buildings. The earth doesn't go anywhere, we put buildings on it, so to speak. That bias feels right to me, the ways things really work.

These are links to the three preceding posts.


Survey Point
Survey Point - Post 2
Survey Point - Post 3 - Five Minutes with Shared Coordinates
If you choose to take the reverse approach, link the site to a building, you have to adjust the survey information to align with the building; since its harder to move the model elements around than the survey file. In this example, I've started in a Floor Plan view assigned to Project North. 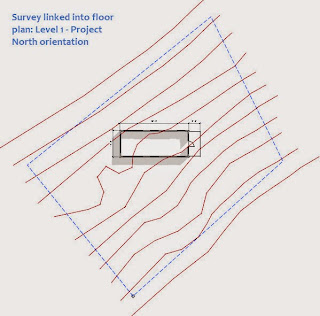 At this point is doesn't look much different than images early on in the other posts. The building is oriented conveniently for putting in on sheets. I need to move and rotate the survey DWG into a better orientation. I'm using the same preferences I had in the previous posts. 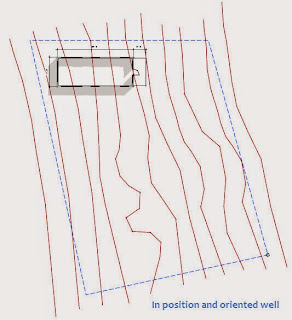 Now I just need to shift the survey down since the contours are at their actual elevations and the building model is at an arbitrary ground floor elevation of zero.

I used the same 22 feet for the ideal ground floor elevation I chose in the other post. 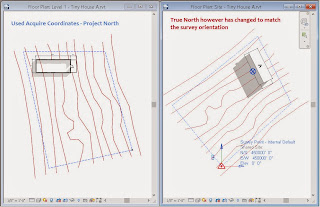 Since there are few possible combinations of actions, let's imagine that I used Acquire Coordinates a little differently. In this case I Acquired Coordinates in the floor plan view: Site and I wasn't observant enough to notice that the view is assigned to Project North which ordinarily wouldn't make sense to do, to me at least. It's easy enough to overlook because at this point the building orientation is technically the same as it is in other views assigned to Project North. 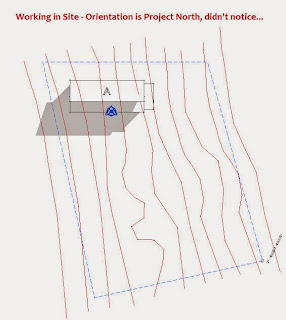 After I Acquired Coordinates I noticed the view didn't change so I realize it needs to be assigned to True North. I do that and the model rotates to show the orientation based on the survey's coordinate system, as I expected initially. 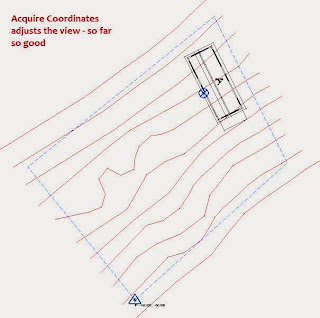 Now a little time passes (we're pretending). I find it necessary to use Reload to update the linked survey file, maybe I cleaned up some of the layers to make it a little lighter in our model. When I click Reload this happens. The survey spins out of alignment. 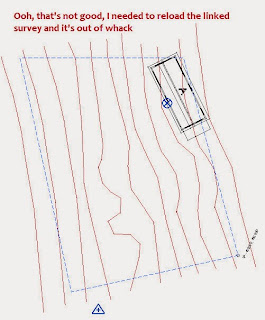 The cause is subtle and simple: it is IMPORTANT to respect the Orientation parameter setting used, in the view that's used, when Acquire Coordinates is used. If you change to the opposite setting and then Reload the link the orientation of the link will change undesirably; regardless of the view you happen to be using during the reload process.

I believe this is another good reason to use a separate Master Site project file. The survey is linked and moved into position but it isn't rotated to reflect True North because UP is North already. The quirk I've described only affects the links rotation and there is no need to rotate it in the Master Site strategy.
Posted by Steve at 11:00 PM

You know EVERYTHING.Thanks for finally shedding some light on auto-rotating dwg surveys.