Both techniques allow us to create a new central file from an existing file that has enabled worksets already.

Save As - Make this a Central Model after Save - respects the Edited By information the project has stored. This means if other users have borrowed elements then you'll find those users among the Owner/Borrower column in the Worksets dialog after creating your new central file. 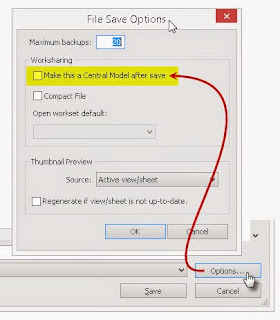 This distinction means it may be possible (though unlikley) to allow users to synchronize their work with the new central file. They'd have to use the Browse button in the Synchronize with Central dialog to point Revit to the new location of the central. I used italics on may be possible because there are so many variables that could prevent it from succeeding that I don't want to provide false hope. If people have not continued to alter or create new elements in their own local files, while this new central file is created, then it may be possible, worth attempting perhaps if you are in some sort of recovery mode.

Detach from Central - completely severs the relationship the file had with the file it came from (usually a central file) and any local files that may exist, as well as ALL ownership information (stored in Edited by parameter). It is a fresh start, utterly.

Btw, this post was prompted by a question at RFO this afternoon. It became evident that this subtlety is something I've not written about, I thought I had.
Posted by Steve at 6:00 PM