If I need to find the area within some sort of boundary the first expectation among AutoCAD users is "Where is the Measure tool in Revit?" There is a Measure tool but it measures distance between a couple points or a chain of points. It doesn't deal with Area.

For that we can use a Region, either Masking or Filled. I sketched a Masking Region using an arbitrary boundary within a plan that isn't already clearly defined as a separate room or space that could easily provide an area to me. I'm imagining a quick draw response to my boss looking over my shoulder and asking, "How much area is there between this, this, that and that?" Start region, sketch with the Chain Option on, Finish Sketch - "There is 375.46 SF sir." 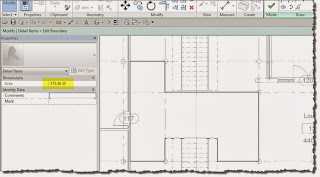 I can just delete the region once I've found the answer. If I create the region in a working view (one that isn't getting printed on a sheet) I can just leave it there for awhile so when the boss comes back and says, "How much area was that again?" I've still got it and only need to look at its Area parameter. A floor could do the same thing, same number of clicks and it also knows perimeter and volume.

No it isn't a tool called Measure Area but the task and click count is at worst an extra click, maybe two compared with the Measure Area in AutoCAD. A keyboard shortcut and it's no more effort at all. It's the same only different.

Edit/added: I mentioned in a comment that the reason Area exists/is a parameter for regions is in response to users requesting the Measure Area tool in AutoCAD.

Awesome tip, Steve! I had no idea on this little nugget. You just made our engineers very happy!!

I generally use a Generic Family – with Instance parameter and calculated attributes. So can schedule the information as well.

Many of the people I meet that want this are already annoyed by idea of using rooms/spaces/areas to find this information. Proposing a family or needing to schedule the information just annoys them further.

The design and development team has always been biased toward solutions that "hang around". In a sense, if it is worth finding out how much area is "here" once it probably is worth hanging on to, just in case we need it again.

The developers added the area parameter to regions because of the frequent request for a Measure Area tool. They just didn't copy the code and rename it as the Measure Area tool, they probably should have.

It's unfortunate now that we can schedule detail items that they don't allow us to schedule area of filled regions. It goes along with my belief that if a built-in parameter is available in the properties we should be able to schedule and tag it.

It would be nice if the area is reported while in sketch mode, rather than after finishing the region. It would take one less click (Cancel>Ok...done). Getting the perimiter would be a nice touch too. I've actually longed for getting the total length of detail/model lines when selecting a chain; sadly, Revit doesn't do that.

Yes I've thought that too. Fwiw, the Measure along an Element tool > hover/Tab will provide a total length for walls and model lines, not for detail lines though.