A thread at AUGI has been documenting the design process for the lair (currently called Project Sauron) of an as yet undetermined alleged evil Lord and Master (LaM). One of his designer minions (Mortimer, who also apparently uses Revit to do his work) has been posting images and asking questions. He recently asked about creating balusters that incorporate a light source. Since this minion has demonstrated pretty savvy skill with Revit already I suspected it was a loaded question, as in he has his answer but curious if anyone else has noticed. I guess whenever an evil Lord and Master is involved I get a little suspicious?

My first thought was a nested light fixture would need to be used and that it would need to be "shared". I thought shared because we have to nest multiple fixtures in a chandelier to create multiple lamp light sources...and they need to be shared for them to render. At least that's how I remember it. Turns out using a "shared" nested light fixture has a pretty weird outcome when used in a baluster and applied to a railing.

See the light off to the left of the railing? That's the nested shared light fixture family. It's locked and aligned to the side of a baluster yet only one light fixture shows up and a little farther away from the baluster than I expected it to be. That and there's only ONE, despite the number of baluster you can plainly see. Even stranger is that I can select the fixture and move it independently from the railing. I can move it next to the railing, but there is still only one.

This time I made a couple changes. I removed the "shared" status of the light fixture and reloaded/rebuilt it all because Revit hates switching between shared and not shared status. The result is a bit more like what I expected this time. 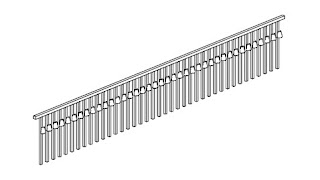 Even better, it renders each fixture!

I hope the LaM treats his minion well after sorting this out?

Unfortunately the videos this post also had embedded have since become unavailable so I've removed the dead links.

Oh...and a Face Based family works nicely too. A baluster face can host it and it will render. Probably the best solution overall because the LaM can tell his minions exactly which baluster he/she wants the light fixtures on.