Previous versions of Revit 2012 imported point cloud data (.pcg files) by placing the first data set using "center-to-center" alignment with Revit's origin. Subsequent imported point cloud data files could be imported using "Auto - Origin to Last Placed" so they all align with each other. That's okay if where the point cloud data ends up in your project file is arbitrary to begin with. It isn't so fine if you are trying to align it all with a real world survey coordinate.

I'm happy to write that the Service Pack 2 that was released yesterday has altered this condition for the better. In my testing, using the same data set I was using before, I find that Revit respects the actual origin of the point cloud file and subsequent files still work using the "Auto - Origin to Last Placed" option as expected. 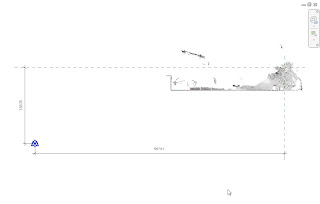 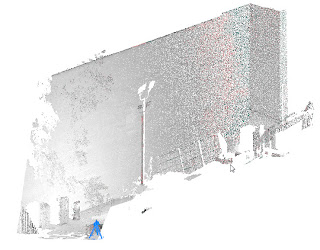 When I drop in my little Laser family and move it into position it all lines up nicely! Too bad it was too late for this one...but the next one will be that much easier! Thanks to the team for getting it into this update!

Thank you Autodesk!! I know point cloud functionality is still fairly new to Revit, but this was an Achilles' heel. We were getting this extremely accurate data but were losing it's spatial accuracy. However, this brings up another issue. Now that point clouds come in at their true coordinates, are we to model on top of the point clouds at those coordinates, or more the clouds back near Revit's origin point? Revit likes things near the project base point, so what happens when we bring in a point cloud at let's say the 350,000', 2,950,000' coordinate? Your thoughts?

I haven't tested the threshold for Revit's respect for true coordinate values but I expect that it lives within the same 20 mile zone we have for importing cad data.

For large coordinate systems I'd plan to move the point cloud closer to the Revit origin and use Shared Coordinates to align the survey reality with the Revit model, same scenario as for dwg data.

I think it's quite handy that point cloud data can be assembled in one Revit project file and linked to another Revit project, and still be visible.

Thanks for sharing your results!

Hi Steve, We have multiple point clouds that we inserted "center to center", and then installed the SP to help with inserting the others. We had the option for "Auto-Origin to Last Placed" until we made a new Central file. After we did this, we don't seem to have that option anymore, even though we have the point clouds loaded into the project...

Yes, there are some actions (how many I'm not sure) that make Revit forget point cloud file relationships. It's one reason why I put them all in a separate file and linked that into my project instead.

Appreciate everyone's comments and advice - will be testing this out in the very near future and will add our team's findings to the mix!