Even if I couldn't get anyone interested in using Worksharing Monitor, I'd still use it myself just for the little sneaky/subtle History button. It's quite handy to get a sense of the project by scanning the list. 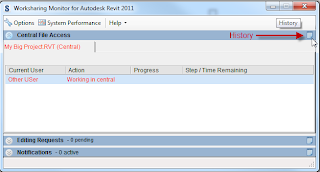 Stole this one from the Autodesk WikiHelp on the subject.

For example a couple years ago, using the log, I discovered a user that never used SwC during the day, waited 8 hours to bother to get around to it. It turned out that he was supporting other users all day and he wasn't actually doing any work in his local file.

Making matters worse (unintentionally) instead of just throwing away the file at the end of the day he did a SwC and left for home. The rest of the team that worked a little later than him suffered with poorer performance while Revit churned through 8 hours x 6-8 other users worth of data updating in his local file. A couple of those SwC sessions lasted 2+ hours, for nothing. A new local file in the morning and he would have been up to date.
Posted by Steve at 3:08 PM

Funny....weren't we just talking about this a little while ago?

Work sharing monitor is a pretty good tool for collabration project. I really like it.

Spying on your users again? ;-)
Having worked on that feature, I am glad to see people are finding it useful.