A few comments responding to yesterday's post made me aware of a couple perspectives I had not given enough fair play in my mind. Thanks for the comments and the attitude adjustment. Just to repeat myself, I'm not opposed to showing alternate units or defending Revit's lack of the concept. I'm all for Autodesk making alternate dimensions a priority for documenting in Revit. Hopefully it will happen sooner than later.

One comment asked about using a dimension style that uses "no lines". I exaggerated, it does use the dimension line but that will overlap the other so it is "invisible". A video will help see how I apply it and these two dialog boxes will show what settings I used. Hope it helps...a little. 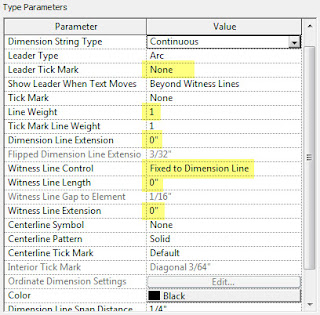 Setting the Units (from within Type Parameters):

Here's the VIDEO and the version at You Tube:

As it turns out the person who asked about this wrote a tip at the RevitForum.org that describes roughly the same thing except he eliminates the dragging of dimension values by increasing the Dimension Line Snap Distance parameter so that one dimension is above the other automatically. A nice improvement which assumes that format approach will be acceptable. Hopefully it will be! If not, the way I show in the video shows what you'll have to consider.
Posted by Steve at 8:44 PM

Thanks Steve for the follow up post. I thought there was a way that I wasn't seeing to eliminate actual dimension line. And thanks for the link back.