I couldn't keep up. The month of June and running into July was over the top for me. When I returned from RTC Australasia at the beginning of June there were many distractions preparing for RTC North America. Then the event itself.

The Revit part of it didn't worry me...it was the drumming part! ;) 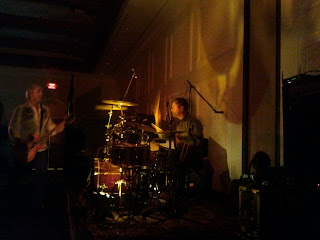 Steve Shell and his band Shell Shock were nice enough to let me play for four songs! Thanks to the guys and especially Chaz for letting me take a little more life out of his drum heads and sticks! Next time you find yourself in Tuscon be sure to check them out!

The week after RTCUSA left me and the family with one week to prepare for moving house. Our lease was up for renewal and we decided to split the difference between our kid's schools. One advantage of leasing over owning anyway, besides when we moved to California there was no way we were getting into the crazy housing market here.

All that is behind me now so I'm attempting to fall back into routine, not that the life of a consultant is ever really routine. It's kind of like being a keeper (soccer goalie), periods of extreme boredom (looking for work) mixed with periods of terror (having more than one can handle)! With the economy (Aussie's just refer to it as the GFC - Global Financial Crisis) the way it is a little more terror than boredom is a good problem to have!

At least there are many other active bloggers to fill in the gaps when I get too distracted! Others like: (check them out!)

Email ThisBlogThis!Share to TwitterShare to FacebookShare to Pinterest
Labels: Off Topic