Trolling the Past - Model Text Family

A couple years ago (try nearly seven!!), in June 2004 I responded to a thread at AUGI regarding some model text and it being used on a sign: 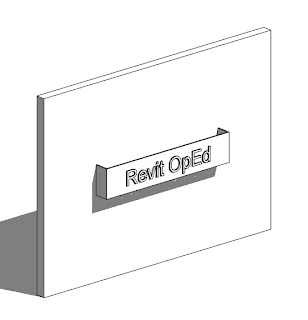 These are the general steps I took to make it:
In playing with the seven year old example that was a rush job if I recall correctly I was able to break it again. It may be a bit unfair but I fixed the family in 2012 today. I've posted the revised working family and the nested model text family so they can be downloaded:

(now you have another minor excuse to get 2012 installed)

Oh...I coined a new term while fumbling with words a little while ago...Family and Formula are now;
FAMULA
Posted by Steve at 10:34 PM