Off Topic - The Axis of Reflection

Whenever I read the Status Bar information for the Mirror Tool I think of a one album only rock band from the late 70's called Axis.

I like listening to music using Pandora and today I stumbled upon what they've got about Axis and their one and only album "It's a Circus World":

Snip...Axis was a power trio made up of Danny Johnson (guitar, vocals), Jay Davis (bass), and Vinnie Appice (drums) that made only one album, It's a Circus World, in 1978. ~ William Ruhlmann, All Music Guide. (image below captured from Pandora's site) 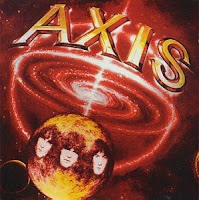 Danny Johnson and Vinnie Appice split from their supporting role with Rick Derringer's group to form this group. As a drummer I really enjoyed Vinnie's work on this album. Every track is interesting and fun to play. In particular I liked his choices for Armageddon. The opening fill of Bandits of Rock is classic! Another is Brown Eyes. Okay I admit it, I could list them all... Cooler still, for me, is that I found that I could download the album at iTunes. I'd just about given up on hearing it again since the cassette tape I had died some years ago.

My friend Tony turned me on to Axis back when he and I were touring with the upstate New York rock band, New York Flyers in the early 80's. Tony is a passionate sound engineer. Later he went on to work with various notable country acts as well as Julio Iglesias, among others. He was/is a huge fan of Rick Derringer's and it was only natural that he'd be interested in any offshoot groups. Like me, sort of, Tony has settled down and stopped traveling by running a theater/stage facility in south Florida. He gets to do it all in one place, even mess around with lighting and he enjoys beating up the drum kit they have for touring groups that don't carry all their own equipment with them.

"Axis of Reflection" Hmmm, reminds me of Axis...which in turn causes me to "reflect" on the past.