Every so often someone asks if they can create a schedule that uses dots for a “yes” and a blank for a “no”. These are typically used to indicate, "yes we want a particular option" versus "no we don’t". A door schedule might use it for a Electric Hold Open or Automatic Door Closer and cabinets might use it to indicate Lockable Doors. No shortage of possibilites.

The answer to this question is a qualified “no”. You can’t choose a “dot” format for yes/no data. Revit only offers Yes/No. It certainly isn’t difficult to understand what Yes/No means when you read it, but people still prefer the graphic nature of a simple dot.

This is a long way round to say you can still do it eh? How? Using the Character Map application we mentioned in an earlier post Are You A Special Character? Some fonts have a dot symbol and Times New Roman just happens to have a pretty nice one. There are a couple others like Century Gothic and Garamond but theirs are little wimpy compared to Times New Roman’s. Here’s the character map info for Times New Roman’s dot symbol.

So how do you set this up? Easy really, you just need to add the parameters that you require to a schedule, using the data type “Text” instead of Yes/No. Then in the field(s) of the schedule enter the symbol value instead of text. Don’t enter anything when the answer is no. Refer to the earlier post for more detail on capturing the symbol value and entering it. Here’s a simple little schedule as an example. 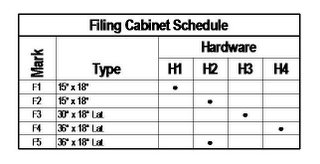 Steve
How on earth did you get the "Hardware" Name above the H1-4 Parameters?
Dwane Stairmand
dwane@ama.co.nz

Click on and drag your cursor across the column headers you want to group. Click the GROUP button on the Options Bar and the header will be added above those columns. Click in the header and type what you want.

When you click in the header the UNGROUP button appears so you can remove it if necessary.

With conditional formatting you can now highlight the cell giving you the graphic appeal you are looking for. I used the IF yes then highlight with grey. Works well.