Reacting to increasing political pressure to make the Freedom Tower project safer from potential future terrorist attacks, the principal planners and designers have changed the scope of the project again! No longer will this project be one of the world’s tallest buildings, it will be the worlds deepest!

Instead of going up, the tower will now become the un-Tower, a deep subterranean structure. The above ground site will become a memorial and little hint of the major structure below will be visible.

Anticipating the likely concern about natural lighting and fresh air, the designers have created labyrinthian chases to refract/reflect light from the surface into the deep spaces below. All habitable spaces will have extensive arrays of LCD panel displays to simulate natural lighting and will have higher than typical ceilings to enhance the feeling of space.

Fresh air will be pumped in from Connecticut and New Jersey. Rutgers University specialists are consulting with the designers to create special filtering equipment to make the air elegant and fresher than fresh. Responsible for a study linking scent to the enhancement of retail sales and the shopping experience, they hope to prove that this can extend to the work environment.

The planned and existing expansive undergound network of transportation will be extended to provide direct service, door to door, to many of the earliest committed tenants thus reducing the load of surface transportation to get staff to the site and to their offices. The structure will require additional reinforcing and multiple bulkhead water barriers to keep the water’s of the Hudson River and East River out of the structure. There was some discussion about creating a large aquarium viewing structure on the East River side but it was decided there isn't really much to look at there and certainly visibility wouldn't be very good.

No longer limited to just the width of a tower the project will be able to nearly double the original leaseable space. The deeper the building goes it will taper outward and increase the interior space available, an undergound elongated pyramid. The following image is from a crumpled sketch found by this Author before being escorted from the building. 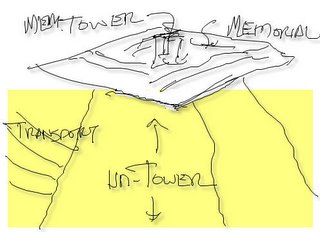 When this new plan will be officially unveiled is not known at this time. Attempts to confirm this story by speaking with city and state officials were unsuccesful, not really surprising to this Author.

About the Author: Freddy Latherdon has been undercover for the last two months in the Wall Street section of New York City working in the copy room of a prominent architectural firm. His cover was so effective that he managed to acquire the nicknames "LOOser" and "THE copy GUY". In fact his inept attempts to actually do the work expected of him resulted in this story. Accidently seeing the memorandum describing the planning for this project he realized that his efforts were rewarded and now had the makings of a great scoop. Thanks Freddy, you heard it here FIRST! This more than makes up for you getting fired!

(Fiction, more fiction, utter fiction…do not be mislead…it is fiction…yep, not a word is true!!)