I've been patiently waiting for some real information on this concept since I first heard a little birdie mention it at the end of last year. In my previous post I listed the bullet points I saw during our presentation but I didn't really explain the problem that this feature is intended to solve.

Fundamentally a firm with more than one office is at the mercy of their internet connection between offices when attempting to collaborate on a single project file. The existing methodology for Central and Local files passes too much data back and forth to be practical. As a result many firms have invested in server computer and hardware based WAN acceleration like offered by Riverbed. This technology does improve the situation and in many cases turning an unacceptable situation into a viable one. Revit Server is both a server computer based application and optimization within Revit itself to improve the project file relationship further.

Do you need Riverbed? Maybe. If you already have it you are primed for further improvement. If you don't you could evaluate it (Revit Server) and then decide whether investing in Riverbed is warranted, it may still be beneficial. The bandwidth available between offices is the critical variable.
The user interaction is described well on David Light's blog because he captured images of various dialog boxes. From the user's point of view there isn't much difference. They create a local file just like before but they choose a project from the Revit Server instead. This is exposed via a drop down option on the Collaborate ribbon's Synchronize panel.

I wrote earlier about Globalscape's WAFS application and to me they seem quite similar. The most notable difference is that a company with active Autodesk subscription for Revit gets Revit Server for the subscription fee (or if you prefer to think of it as "free"...no additional money). Globalscape's solution will cost about 3K for each agent software initially with a yearly subscription fee thereafter. You'd need two agents to accomplish sharing between two offices, more agents for more offices naturally.

Robert Manna and David Light both shared network charts that explain the relationship between computers. They both have had the benefit of using the technology during early testing. I mentioned earlier that Robert is conducting an AU Virtual session about their implementation on an ongoing project. 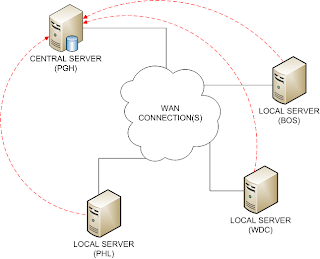 Part of the technology includes a reworking of the user permissions that used to be collected into individual files (eperms). A new database is now used to manage user borrowing to provide a more robust monitoring and control system.

Back to workflow, all changes made to your local file are saved to a central file that is on a server located in the same office as your local. The changes to this central file are passed to the central file that exists on Revit Server. Changes made by others are also passed to Revit Server and these changes are passed to each other's local files via the Central files that are on their own office's servers. During the presentation yesterday it was stated that 100 milliseconds seems to be the threshold at which synchronization delays are perceived by a user so that is the threshold they are seeking to avoid, faster not slower than 100ms.

I encourage you to read both David's post and Robert's post as they have been using this tool for awhile now. They both offer worthy insight that should help you decide how well it will meet your needs. Keep in mind that this, like many other developments, are a stepping stone toward further developments in worksharing.

Added: Lachmi Khemlani's AECBytes has a new article based on an interview with Autodesk and Robert Manna. You can read it HERE. The article also discusses the new Conceptual Energy Analysis tool.

[Added March 30, 2011] Jame Wong has a couple videos on his blog to guide you along with installing and setting up Revit Server.
Posted by Steve at 6:00 AM

Whats the difference between this and Microsoft Groove, which does the same thing (and has for some time). It can be deployed client to client or with a central Groove server. Help me understand. Thanks!

I don't know anything about Microsoft Groove but after what I just read on a couple sites about it makes me believe that it wouldn't work for Revit project files.

Similar for Drop Box, in my testing back in May/June I found that I could host central file on Drop Box and Sync. Technically it works. Unfortunately it fails to prevent simultaneous borrowing because it does not sync the distributed copies of the central files fast enough.

The key thing for Revit projects is making sure no element can be borrowed by more than one user at the same time. The new Revit Server manages this carefully while other tools may not.

Feel free to try it out but be careful to test heavily.

The level of "back-of-house" changes that Revit Server brings to the table cannot be under-estimated. All of us have scratched the surface on this (including the recent article in AECBytes). While for the end user very little changes, much of development time (to my knowledge) was spent on improving how Revit moved and managed the data. Something which third party applications are not currently in a position to take advantage of since RS is currently a closed system at this time.

So where do I get Revit Server??? Where do I download it from?
Thank you

What if you are running Revit Architecture and Revit MEP, do you need 2 seperate servers for the versions?

No, to Revit Server RAC/RST/RME are just "files".

Added a link to Jame Wong's blog so people can find his post and videos on the subject.

Hello
Excellent pot with excellent information. I have you bookmarked to check out new stuff you post. Keep sharing.
Dedicated Server