Reading a thread at Autodesk's Revit Community forum David reminded me of the quirky issues related to the Viewer when worksharing is being used. If someone launches Revit Viewer and then tries to open a project that has enabled worksets they'll get this warning. 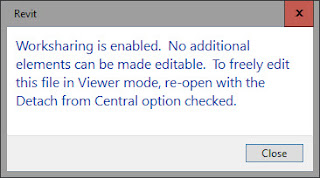 When the file is opened and they try to print, export or save they'll get this warning even though they haven't DONE anything...but Revit has made changes to the file in order to create a new local file. 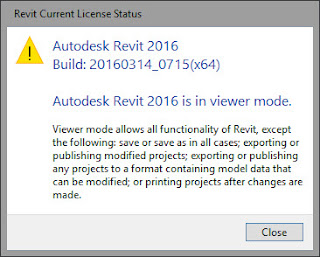 Okay, let's follow the instructions in the first warning message. We'll open the project using Detach from Central. Sorry, "Do not pass Go, do not collect $200". That process also changes the file. Still no export, save or print for you!

The ONLY way we can use Revit Viewer to open a project with Worksets enabled is to open the Central File itself, by un-checking the option to Create New Local. This means that user is now working on the real central file with Revit Viewer.

If you do this you will likely encounter several of the messages shown in the first image. The projects I've done this with all have linked files and it seems to pop up for each link (RVT) used and once more if there are any linked/imported DWG files.

To the good, they won't be able to synchronize their work nor will it prompt them to Save when they close the file. They won't be able to edit much of anything though because they can't borrow elements. The notion of using Revit Viewer to poke around the model, do some experimental stuff within the model is off limits to Viewer mode. We are able to print or publish to DWF, because those formats don't create an editable version of the data/model.

It seems to me that the notion of Revit Viewer for workset projects is fundamentally flawed, if we're thinking of it as a way for Project Managers to poke around, do anything other than JUST LOOK at views. If we'd like them to be able to cut a section view or hide things, do anything that requires temporarily borrowing something, that's all off limits to the Viewer.

For that we'll have to show them how to use Detach from Central AND to be careful not to save that file overwriting the original project.
Posted by Steve at 2:00 PM

One way to get around this is to copy the central model onto your computer thus creating a local copy 1st then open up using Revit viewer then it will work.
I wish they would enable the viewer to work with workshare projects to avoid all this copying.

I've actually had good luck with the Viewer + Detach from Central. You'll still get the first pop-up in your post for every *linked* model inserted to your detached model, but that's it. Then you can add or modify anything you like, and it won't be constantly checking back with the Central file for permission. And if you don't touch ANYTHING--don't open any new views or click on any objects--you should still be able to print. At least, that's worked for me.

Interesting, Print/Publish don't work for me even if I try immediately after the file opens using DfC. I've tried it with many project files...all the same result. Using DfC does allow for interaction with the file but naturally that kills printing/publishing. Just tested again using 2016 Viewer...I'll have to double back and try it in 2017.

So, yes...we can use DfC to interact with the file but then have to close it and open the Central directly to print/publish, at least I do because I get the message no matter what. Quirky workflow...