Boy this app doesn't get much love. I've read a couple of posts elsewhere that are far less charitable than I've been. As I mentioned in the podcast I did with Bill (Grumpy Steve) I think it had a better name before when it was called Autodesk Application Manager. At least then the name suggested what it was meant to accomplish. Now its name is ambiguous at best and meaningless at worst.

A couple comments in response to my last whiny post pointed out that if I'd read the readme file for each update I would have realized that it would be necessary to uninstall the existing versions first.

My reaction? Okay my bad ... but then I thought that's not much of a application manager is it? Tell me there is an update but you need me to go elsewhere to read a document and uninstall the software so I can come back and run the update. I'm imagining that the user experience of applying an update to an app ought to be just a little bit like doing that for an app from the iTunes store?

Then again with its new name...it's not a manager anymore.

This morning a little progress though because I see AdA has started up AND there is another update indicated by the icon in my system tray. 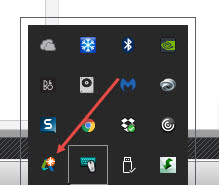 I've already been told this application has an Update quite a few times now. Each time I've attempted to apply it, no success. It just shows up as available again the next time around.

This time I thought I'd listen to the advice offered in the comments I mentioned earlier. I clicked on the Readme link (blue text in the update listing). Instead of taking me to the readme document or the page that has it I find myself looking at the primary BIM 360 product page.

That's not what I expected (implied by the term Readme), nor is it helpful. Okay, I can deal with this. I'm reasonably resourceful (I think). I'll just go chasing after the update via the Knowlege Base. I run a search against each of the four BIM 360 applications listed ... nothing found. Okay?! Since it is for Revit 2015 maybe it's an update that is hiding under Revit 2015? Run a new search against that criteria instead ... yeah, you guessed it ... nothing found.

Yes, I submitted feedback through the built-in comment dialog that AdA has. That it has one built-in should be a clue I suppose.

I think, if AdA is going to tell me there is an update and make it worthwhile, it should do everything necessary to help me actually apply the update. For example, I was told (via comments) that it was necessary to un-install the existing versions of the other apps I was trying to apply an update for. I've since done that and applied the updates, great! The update item in AdA should have been formatted like this for example.

Better still the update should be smart enough to un-install the precedent software first, if it is required. It's not like there isn't a precedent of software updates doing that.

Since my most recent attempt to use the readme link ended with no joy, most likely just the victim of being assigned the wrong URL, it seems reasonable to provide the most important warning related to succeeding with an update, that it will be necessary to take separate action to remove the existing version first. Seems easy enough?

For now I'll just ignore the update since I won't be needing Revit 2015 this week. I'll see if it factors into my situation later, if it ever does.
Posted by Steve at 11:00 AM

I wish I could just download the update AdA (possibly) tells me about and figure out what to do with it later. I've got 60 installations to worry about, and I've got to push things out to all of them, nit just run the installation myself.
I finally found that you can Cancel the Install, and dig the files out of your My Documents folder for later use.
If you can figure out which is which.
Here's the last one I got:
C:\Users\5905\Documents\Autodesk Application Manager\32E42715-A9F3-4E52-9166-36A2C3AB1B49\AutoCAD_2016_Hotfix_3_64bit.exe
Luckily the .exe had a reasonable name, but not all of them do.
Took me a while to figure out RevitBP_v1_2017_Win_64bit_dlm.sfx.exe was the Batch Plot plug-in.

Dave, beyond grabbing the download, you can probably also run that EXE and it will unpack to C:\Autodesk, then you can root about and find the simple MSI that can actually be installed silently. For example C:\Autodesk\RevitBP_v1_2017_Win_64bit_dlm\x64\RBPU\RBPU.msi is the only thing you really need. The other 200+ files in 70+ folders are just cruft required by AdA and/or the Deployment when adding the installer to a deployment. Crazy.

This update has been bugging me for ages, I have done the un-install and then done the update only for it to show up again a few days later. Luckily I have install rights unlike most of my users who have to contact IT to get updates done, surely if the software was allowed to be installed updates shouldn't need admin rights. the application manager should have some sort of trust certificate system that would install (uninstall as necessary) any updates that have the correct trusted certificate without needing to contact IT every couple of days.

I agree with you on this one Steve.

Dave, are you saying that we cannot just go to the Autodesk website and download v2017 updates like we could with previous versions?
If that is the case, it will be an absolute nightmare to manage the process. If that is true . . . .
Gordon - when I tried what you are suggesting for the actual original Revit 2017 install, it did not work to use the unpacked files. It just gave me errors. So perhaps we'll have the same issue with trying to use unpacked update files?