Long awaited, much rejoicing was heard when Revit users heard the news, there is a new text editor. Really? Can it be true? Yes they've revisited the text feature in Revit! Will you be pleased or at least happier? They certainly hope so.

Initially things don't look different. You still click the Text button and find text defined by Types. Text Types have the same Type Parameters we've had before. Prior to clicking to place text the ribbon is still the same too. You click to place text in the same way. Once you've done that you'll begin to notice some differences, namely in the context ribbon panel.

To begin with you'll notice, on the right end of the ribbon, that there is a Close X button, a formal front door to finish editing text now. The only way to finish editing before now was to click in empty space, outside of the text element somewhere.

On the paragraph panel you find the same list of choices for indenting, bullets, and outline formatting with numbers or letters. There are two new buttons to increment the indented list. This permits us to increase the starting value of a list. Similar but a little different from a word processor like MS Word. 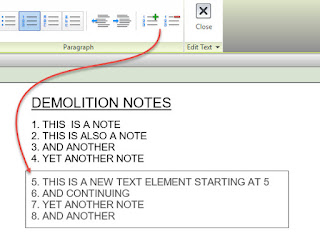 The previous image has different text elements for each indented (numbered) list. We can insert a space in a series of notes and have the numbering continue within a single text element too. It is a bit quirky however. I find it only works if you create the numbered or bulleted lines first and then go back and use CTRL + Shift to insert the blank line between the list sections. Here's another example using this technique instead. 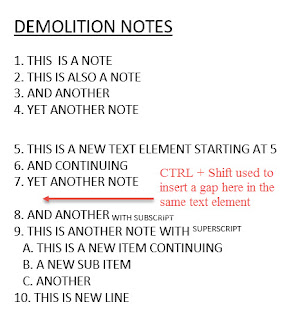 You'll probably suspect or notice that I used a separate text element for the header of the notes. That's still necessary because the text types don't support overriding font height, as before. Indented lists that use one of the four bullet or numbering options cycle through each of the four choices when you Indent a line, like this. 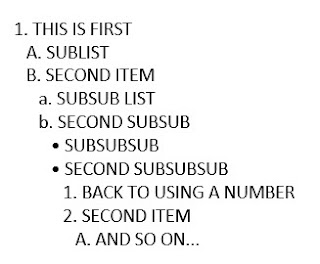 I can guarantee that someone has a numbering syntax they want that the text editor doesn't support; if yours doesn't match the above I'm correct. FWIW, this IS the first outing of the brand new engine in the car so we'll have to take them at their word that they'll continue to improve on it with future updates and releases.

Also new are buttons for Superscript, Subscript and All Caps. As you can see in the next image All Caps is currently active which is causing everything I type to use uppercase. It is worth noting that all the text will be displayed during editing, a result of their abandoning the special text editing canvas we had before (fixes zooming too, more on that later). 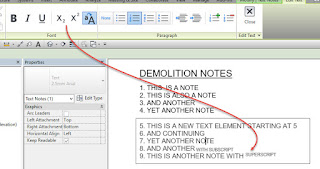 Empty Text Notes are allowed if there is a leader. If the leader is removed the Text Note will be removed (if it does not contain text). Those people wanting to just place a leader have just experienced a spike in their heart rate. 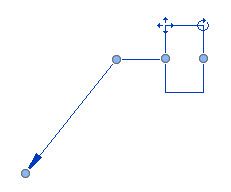 This means we can place just a leader next to a View Reference family that, as a tag family of sorts, remains leader-less, sad view reference family...sad face.

They've managed to fix the zooming issue we've had with editing text. When we are editing text zooming in and out of the view doesn't influence the text element negatively now. As I mentioned briefly earlier, you'll notice that we don't enter into a special text editing canvas anymore. The rendering engine that generates what we see on screen has been reworked to permit this to behave better. That's a welcome change.

I still think it's wise to use the Zoom Sheet Size feature to get a better sense of proportion while editing the text. With what is possible with screen resolution these days though it's not uncommon to find it quite hard to edit text without zooming closer to it. The same could be said of the schedule editing view too, which remains unaffected by these changes however.

Part of the process of building the new text editor involved comparing how Revit worked with AutoCAD. As a result, they've revised the method for measuring text size to be a bit more like it (AutoCAD). In the past the size of text was measured from the font baseline to its ascender line (that's technical font speak). Unfortunately typical characters do not extend to the ascender line. This means when we attempt to measure the resulting font we usually don't get a result we'd expect. As of 2017 the size of text will be based on using the font's cap height, which is measured from the baseline to the top of the capital letter "M". That decision was based on customer feedback and further review of AutoCAD's own code.

There are still going to be some differences if we observe font generation in both programs very closely, in particular when it is exported to DWG. A developer explained it like this. In Revit when you want a certain text size in length units it has to pick a size that matches as close as it can in point size, for example 12 pt Arial. Revit selects a size in 1/2 point increments. This rounding affects measuring where a paragraph will wrap to the next line. This means the text size or the text note width cannot be exactly reported if exported. No font is identical to another, the spacing between characters is different so it isn't possible to accurately scale it based on the width of the note either.

Are you familiar with these settings governing exporting Text to DWG format?

These influence how Revit decides what is most important to you during the export. Preserve visual fidelity is most appropriate when we want the text to LOOK as close to the same in Revit and AutoCAD as possible. Use Preserve Editability when you're more interested in matching the size of the font as close as possible; which may result in different looking bodies of text in AutoCAD. Put another way, if you want the paragraph to look the same, wrapping and number of rows of text then choose the first. If you're more interested in being able to select the text in AutoCAD and see the same text height (again as close as Revit can do it) value then choose the second.

Known Issue - Open Type Fonts (OTF) not supported yet, due to issues exporting to DWG

Finally, when you upgrade from older projects you're going to have to deal with text changing to reconcile these changes. That means you CAN'T upgrade a project a couple days before a major deadline and expect to just hit print. Then again, when has that ever been a reasonable expectation or assumption? Lucky that for the most part it has been practically true. In this case they've completely re-written the underlying text editor code so it's not likely to be as uneventful as some upgrading has been in the past.
Posted by Steve at 8:00 AM

About time right! Thank you for the update.

Nice article. Does the new text command allow you to change to lowercase or sentence case or just to UPPER?

Still no break feature for columns of text!? Grr. All those generic notes I front with the Gxx sheets and all those spec sections still have to manually be broken up.

it just pisses me off that it's taken this long for a few lines of code to be written to give us the simple ability to something barely approaching the functionality of a word processor. Revit 2017 is just another incremental bullshit release.

Anyone else finding that text is printing the incorrect size? Upgraded models look fine before hitting the print button but then are printing at a slightly larger size. It applies to everything.

Tyler - Yes! I'm surprised you say it upgrades fine and looks fine. All text is affected by the new text editor and how they've changed the way that text height and size overall is calculated...to be more like AutoCAD btw. All text is affected whether printed or not so you'll need to look at everything very closely.

You must have missed my other text related blog posts, including one warning that upgrading project (to 2017) is NOT a minor thing this year.

Has anyone tried editing text after flipping a section? my text edit box and seletion is also flipped.

Has anyone upgraded a project to Revit 2017 and noticed the text wraps differently? In other words - text that appeared as a single line of text in the previous version of Revit now wraps to 2 lines of text and screws with a bunch of plan notes. Any fix for this aside from trying to fudge the font size down a smidge?

Yes, they completely overhauled text in Revit for 2017 so it is no small thing to upgrade a project to 2017. You must have missed my other blog post:

has anybody found that they cannot copy/paste from excel anymore? we use excel schedules and sometimes I need to copy multiple text boxes from excel into revit. Previously it worked in 2016 but it doesn't seem to work in 2017.

Just tried it, multiple cells copied to clipboard will not paste into a text element in Revit 2017.2. If I copy the text to Notepad first and then Copy that text to clipboard it will paste into Revit.

David F - You need to create your numbered list without the blank lines first. Then place your cursor at the end of the line above the space you'd like to create. Use SHIFT + Enter to create the space between the numbered items.