The other day I poked Autodesk about this feature. As it turns out it is deployed slightly more automatically. The catch is that the latest iteration of Autodesk Desktop Application (I'm going to call it AdA) must be used to see these updates.

My first problem was that AdA wasn't working. It just displayed a blank white screen. I also noticed that there was no Autodesk (A icon) in the system tray for an active service. Eventually I used the wisdom of The IT Crowd; turned it off and on again. That restarted the service and AdA started working, displaying information.

The second problem was there were no updates to choose from. I logged out of A360 and closed its system tray instance. I also logged out of A360 via Revit, since I had it open. I closed the instance of AdA in the system tray too. I had a browser open looking at my Manage portal. I thought that maybe my access settings were wrong. I logged out and closed the browser too. Then I logged back into A360 and launched AdA...voila, updates appeared. It made no difference earlier that I used the right-click Check for New Updates option for AdA in the system tray repeatedly.

Once I got it working again this appeared in AdA. 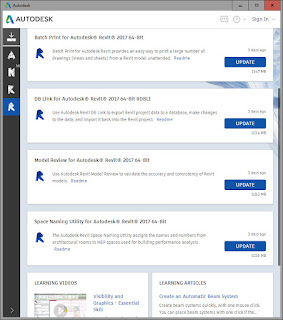 This a tiny bit better.

People will still have to pay attention to be alerted to download and install it. If they don't have enough control over their computer they'll still have to get EyeTee involved. I'll have to see if I notice more people have it installed in the coming months.

It is also a bit tedious that every one of the updates is a separate installation; must be run and completed before starting another. If you attempt to run them while another is running you'll run into messages about something already being in process.

By the way, when you run Revit after installing all the available updates you may be greeted by "Security - Unsigned Add-in" warnings. Nice...

I've got my Space Naming Utility! Do you? I hope so!

I love IT Crowd.