The help documentation (link below) offers up this table to break down which system classification calculations are made available to us and which are able to take advantage of this new Performance choice. 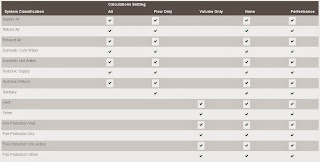 This is intended to improve performance when working/editing large MEP system networks. For each system type we choose to assign this Performance setting to, Revit's system propagation is disabled on every system assigned to that system type. The Calculations parameter can be included in schedules, which can make it easier to toggle on and off. Keep in mind, if the file is opened in a previous build (not Update Release 3 or newer) then the parameter may/will not display correctly.

At first glance it doesn't seem much different from choosing None because to restore system propagation we have to change the setting back to use a calculation method, other than Performance or None. My initial expectation was that None would shut down calculations entirely and Performance would permit some calculations but do so in a way that would improve my experience or perception of performance, Revit's responsiveness as I work.

As I've learned from the developers, despite carrying a name that suggests to me otherwise, under the hood, using None does NOT tell Revit to completely ignore everything related to the connected network. This new Performance setting DOES allow Revit to completely ignore any system (as far as calculation propagation is concerned) that is assigned to the Performance setting.

As I understand them, the two choices are a trade off between accepting slower performance for each and every model (our) interaction (by choosing None) or having a quicker response (from Revit) for each model interaction, choosing instead to endure a longer wait after turning back on calculations (using Performance). Perhaps in a future release we'll just see None eliminated or replaced by Performance? At the very least I think the naming is a bit misleading.

A side effect of using this setting is that duct/pipe sizing and the System Inspector will not work on systems that are assigned to it either.

You can READ the Help Documentation HERE.
Posted by Steve at 8:00 AM